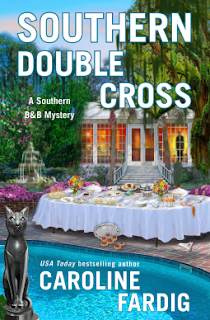 Goodreads synopsis:
A fundraising party goes south in a delightful cozy mystery from the USA Today bestselling author of Southern Discomfort and the Java Jive novels

Quinn Bellandini is ready to get back to running her grandfather’s B&B in Savannah, Georgia, with her sister, Delilah—but first, she has to coordinate a fundraising event at the house of local philanthropists, with the help of her boyfriend, Tucker Heyward. Everything is running smoothly until Quinn’s friend, Pepper Fox, frantically calls her with the horrifying news that the lady of the house was found dead. Pepper’s brother, who was working as a caterer, is soon charged with her murder.

Pepper knows her brother didn’t commit the crime and asks Quinn, now a veteran detective with two solved murders under her belt, to prove his innocence. Quinn can’t bear to see her friend upset and enlists Delilah and Tucker to help investigate.

The invite list quickly turns into the suspect list as tensions mount and old feuds are brought to light. Could Quinn have hired the only catering company in Georgia that throws in a murder on the side?

This is the third book in the Southern B&B Mystery series by Caroline Fardig.

The Bellandini sisters are back with a third installment of this exciting series.

Quinn and her sister Delilah are catering a big shindig event when the hostess ends up first spattered with the night’s dessert and then ends up dead in her upstairs bedroom. Quinn’s bandmade Pepper’s brother is fingered for the deed since he went along with a robbery scheme. A robbery scheme gone bad, it seems. Since they have little money, Quinn and Delilah decide to help them find the reasonable doubt the judges look for in cases.

There was a lot of angst in this surrounding not only the mystery in general but in the personal relationships surrounding the duo. Tucker and Quinn seem to have much of a strained relationship that I wondered what would happen to them in the future.

There is a big twist at the end for both the mystery, which was cool, and for the personal relationships in general. Don’t want to give too much of the excitement away. Just read this and see for yourself.

Great read. Another favorite series, for sure. I feel like this could be the last installment of this particular series, but one never knows the future of such things. I hope the author plans to keep it up since it just seems to be getting to the interesting stretch where a series becomes comfortable and fun to dive into.