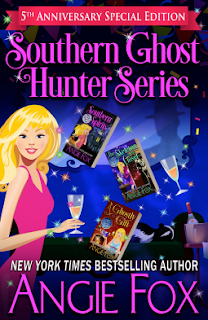 Southern Spirits:
When out of work graphic designer Verity Long accidentally traps a ghost on her property, she’s saddled with more than a supernatural sidekick—she gains the ability to see spirits. It leads to an offer she can’t refuse from the town’s bad boy, the brother of her ex and the last man she should ever partner with.
Ellis Wydell is in possession of a stunning historic property haunted by some of Sugarland Tennessee’s finest former citizens. Only some of them are growing restless—and destructive. He hires Verity put an end to the disturbances. But soon Verity learns there’s more to the mysterious estate than floating specters, secret passageways, and hidden rooms.
There’s a modern day mystery afoot, one that hinges on a decades-old murder. Verity isn't above questioning the living, or the dead. But can she discover the truth before the killer finds her?

A Ghostly Gift
Verity Long doesn't want to see ghosts, and she'd rather not let anyone know her little secret, either. But when a restless spirit stirs up trouble in her friend's resale shop, Verity and her very new, very dead gangster friend team up to learn what is really happening. They discover an age-old secret and must learn the truth behind a mysterious disappearance... before it's too late.

Skeleton in the Closet
A haunted library is no place for a girl who can see ghosts, but when Verity Long stumbles on a dead body in the middle of the main reading room, she has to believe someone… even a dead someone… must have witnessed the crime.
Her ghostly sidekick Frankie warns her to stay out of it. The very alive, very handsome deputy sheriff, Ellis Wydell, inadvertently places her directly in the middle of it. And her ex-fiancé, Ellis’s brother, is back with an agenda of his own.
Undaunted, Verity presses forward, uncovering scandalous secrets, long-forgotten ghosts, and a shocking trail of clues that places her directly in the path of a killer.

This collector’s edition has two full books over 35o pages each and a small novella that is super cute and inspiring. This is the type of bind-up that will give you a great introduction to the series and then suck you into the world enough that you will want to continue on with book three.

This is the first book in the Southern Ghost Hunter mystery series by Angie Fox.

This book was like a comedy of errors. First Vertity traps Frankie on her property after she dumps his ashes into the garden thinking it was just an ordinary vase in need of washing. Now he is stuck to just haunting her property. But since there is a bit of residue in the vase, Verity can tote the container around and it gives Frankie the ability to move beyond the house’s property line.

Verity is in a bind. She is about to lose her house and she needs money fast. First Frankie has a get rich quick idea which backfires, then she realizes that with Frankie’s help, she can see spirits. Now her ex’s brother, Ellis, is in need of a little ghostbusting and enlists Verity to assist him in disposing of the annoying spirits causing destruction on his property. Verity can’t say no. She needs the money. But being around Mr. Wonderful won’t be easy. He is the brother of her ex and he doesn’t have the highest opinion of her. Not to mention, he is the town cop and could probably arrest her if he so willed.

I thought this was a hilarious cozy mystery romp into the spirit world. I never knew what to expect and the plot went places that would probably crop up in future books. The world building on this was awesome. What a great start to a series. I am looking forward to seeing what Fox has in store for us next. I am intrigued by the budding relationship between Verity and Ellis too. Crossing my fingers for a love match between the two of them.

This is the first novella (#1.5)  in the Southern Ghost Hunter mystery series by Angie Fox.

This was a real quick read and there wasn’t a lot of conflict here or mystery. Everything was wrapped up in very few pages but I thought it was so sweet how Verity helped a lonely ghost find his lost love. Just AWE-inspiring!

Just wish there had been some Ellis sightings in this novella. I missed seeing him in the pages of this one.

Skeleton in the Closet #2

This is the second book in the Southern Ghost Hunter mystery series by Angie Fox.

I feel like there is a real kinship to the Scooby-Doo gang here. Not sure why. There are ghosts, yes. But they are usually misunderstood and the bad guy is usually a living person who is not living their best life.

This had a lot of good backstory and gave us a glimpse into the lives of Ellis’s parents and how invested they are into keeping their standing in the community even when a long held truth about town history is found to be an out and out lie!

I never really felt like the reason Verity’s ex was trying to squeeze himself back into her life was thoroughly uncovered. By the end, when he didn’t want her anymore, I figured that he must have been as wrapped up in his family’s drama as his mother was.

This series is sort of unassuming. It looks like one of those superficial cozy series that just seem to be spit out every two weeks with only a few pages to the mystery. But this is not that. This series is completely thought out and just a joy to read. I don’t feel like I am waisting my time reading this. I am enjoying the heck out of it!

Can’t wait to start reading the rest of the series! I am hooked on Verity, Ellis and Frankie!