The Stopover (The Miles High Club #1) by T.L. Swan 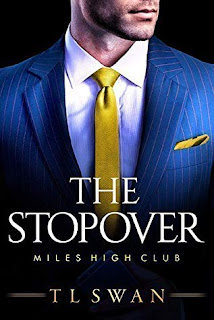 The Stopover
(The Miles High Club #1)
by T.L. Swan

Goodreads synopsis:
A memorable night of passion refuses to stay just a memory in this sizzling and scandalous romance from bestselling author T L Swan.
I was upgraded to first class on a flight from London to New York.
The food, champagne, and service were impeccable.
The blue-eyed man sitting next to me, even better.
He was suave and intelligent.
We talked and laughed, and something clicked.
Fate took over and the plane was grounded, and we had an unexpected stopover for the night.
With no plans, we made our own.
We danced and laughed our way around Boston and had a night of crazy passion that no woman would ever forget.
That was twelve months ago, and I haven’t heard from him—until today.
I started a new job and met the CEO. You can imagine my surprise to see those naughty blue eyes dance with delight when he saw me across the mahogany desk.
But I’m not that carefree girl anymore. My life has changed, I have responsibilities.
I just got an email.
He wants to see me in his office for a private meeting at 8:00 a.m.
Naughty blue eyes have no place in the workplace.
What kind of private meeting does he have in mind?

This is the first book in the Miles High Club series by TL Swan.

I love a good Billionaire boss contemporary romance. And this fits the bill nicely.

Basic premise: a man and woman meet on a plane. Instant chemistry and after layover due to the weather, the two have wild passionate sex. A year later, girl lands her dream job at Miles Media. Little did she know that her wild encounter man would end up being her boss and not just her boss but the CEO of Miles Media!

I thought this book was great. In a lot of ways both of these characters are a bit screwed up. Emily kept dating a man she knew would never commit to her since it was easy. Jameson has always been a one night stand type of guy. Even his one fiancee was a lady who could never truly commit to him.

There is a lot of drama and angst in this. The first half of the book where they meet each other and then encounter each other again was the stuff you tend to expect and it gets us invested in the characters. And the last third of the  book was mind-blowing. I have to admit I did get a bit weepy during the whole “girl loses boy” scenario. If I had been cast in this book. I don’t think I would have keep pursuing Jameson as long as Emily did. I would have given up so much sooner. I did think that the middle 150 to 200 pages were a bit too long. I could have deleted the entire middle section and been just as happy with this book. The middle did seem a bit of a slog. After all, this book is 521 pages which I feel is a bit on the long side for a contemporary romance.

I loved the whole Miles Media vibe,  though. Wish there were a real media company like that owned by four hot guys who were all available to date. The work atmosphere seemed so down to earth and employee-centric that I was jonesing for someone to get me an interview there.

The next book in the series THE TAKEOFF will feature Tristian. He is basically male protagonist number two in this story. If it hadn’t been for him, I don’t think Emily and Jameson would have made it through their massive issues.

If you love books like this, definitely read this. Just know that the two of them are in bed for a good portion of the book. It is so prolific that you might start rolling your eyes… not again!

Love a good contemporary romance? Check this one out. You won’t be disappointed.

I received this as an ARC (Advanced Reader Copy) in return for an honest review. I thank NetGalley, the publisher and the author for allowing me to read this title.
Posted by Toni at 1:57 PM