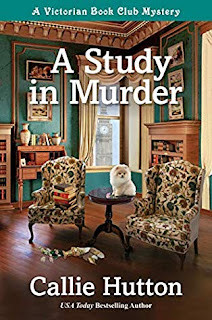 A Study in Murder

Goodreads synopsis:
A mystery author is charged with murder--and the plot thickens faster than anyone can turn the pages--in USA Today bestselling author Callie Hutton's new series debut, perfect for fans of Rhys Bowen and Ellery Adams.
Bath, England, 1890. Mystery author Lady Amy Lovell receives an anonymous letter containing shocking news: her fiancé, Mr. Ronald St. Vincent, has been dabbling in something illegal, which causes her to promptly break their engagement.
Two evenings later, as Lady Lovell awaits a visit from Lord William Wethington, fellow member of the Bath Mystery Book Club, her former fiancé makes an unexpected and most unwelcome appearance at her house. She promptly sends him to the library to cool his heels but later discovers the room seemingly empty--until she stumbles upon a dead Mr. St. Vincent with a knife in his chest.
Lord Wethington arrives to find Lady Amy screaming and sends for the police, but the Bobbies immediately assume that she is the killer. Desperate to clear her name, Lady Amy and Lord Wethington launch their own investigation--and stir up a hornet's nest of suspects, from the gardener who served time in prison for murder to a vengeful woman who was spurned by St. Vincent before he proposed to Lady Amy.
Can they close the book on the case before the real killer gets away with murder?

This is the first book in the Victorian Book Club mystery by Callow Hutton.

In the style of the classic Sherlock Holmes mysteries, Hutton has created a true gem with her new series featuring Amy Lovell and her good friend and book club cohort, Lord Wellington. Set in Bath, England, this murder mystery was so captivating I almost didn't want it to end. The setting, the mystery and everything inbetween made me fall in love with this Victorian world.

Basic premise, Amy wants to break her engagement with the man her father had betrothed her to, Mr. St. Vincent. She does so since his connection to the opium trade was discovered via an anonymous note. Days later, the man calls on her and when she goes down to see why he had come she discovered his dead body and this thrust herself straight into the path of the detectives who seemed to believe her capable of murder.

I loved the idea that Amy was a mystery author and took action by diving right into an investigation to clear her name. Since this is set at the turn of the century it might not be everyone's cup of tea but I believe if you start reading you won't put this one down until the murder is solved.

Totally digging this book and look forward to any new offering this author will come up with. This is one roller coaster ride you won't want to miss!

If you love a good Victorian cozy mystery, definitely check this one out. You won't be disappointed.

I received this as an ARC via NetGalley in return for an honest rebiew. I thank NetGalley the author and the publisher for allowing me to read this book.
Posted by Toni at 4:57 AM