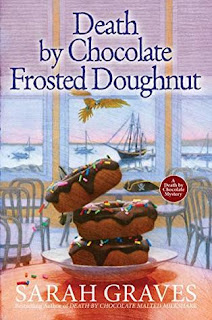 Goodreads synopsis:
When a pirate festival blows into their small town, bakeshop owners Jacobia “Jake” Tiptree and her best friend Ellie White expect they’ll be busy baking up a storm, but instead they find themselves marooned in a new murder investigation after someone kills a well-known food writer and TV personality . . .

Everything is shipshape at Jake and Ellie’s new waterfront bakery, The Chocolate Moose, especially now that the annual Pirate Festival is dropping anchor in their quaint island village of Eastport, Maine. Jake and Ellie are ready for the bounty of tourists sure to flood their shop. But their plans quickly sink when the body of celebrity foodie, Henry Hadlyme, is discovered in the Moose’s basement.

Jake and Ellie are horrified, but their shock turns to dismay when Jake is pegged for the murder. Now, to clear Jake’s name and save the shop, Jake and Ellie must swashbuckle down and figure out who among Henry’s numerous enemies scuttled him in the cellar. Was it a long-ago jilted sweetheart’s vengeful relative? His long-suffering personal assistant? Or perhaps some bitter-as-dark-chocolate unknown enemy, now aboard the mysterious ship lurking in Eastport’s harbor?

Alas, dead men tell no tales, so Jake and Ellie will have to get to the bottom of the case on their own and find the real killer before anyone else is forced to walk the plank . . .

This is the third book in the Death by Chocolate mystery series by Sarah Graves.

You could just sense it on the wind that when a some-what popular podcaster is found dead that Jacobia, “Jake” for short, would end up being the one fingered for the crime. I mean, come on! The body was found in the basement of the bakery of Jake Tiptree and Ellie White own. It was an only natural assumption, right? The name of this dynamic duo’s bakery just cracks me up: The Chocolate Moose. So cute and so appropriate for the locale! They are hoping the business gets noticed a lot more since the Pirate festival is right on their doorstep. But I don’t think the notoriety in the form of a dead body is what they were thinking.

I thought this was a well written mystery that really kept me guessing. I have to admit that I had no clue as to the identity of the killer. No surprise there, right? The author’s always fool me. Dang red herrings! There is a lot of backstory which I thought was good since this was my first foray into the world of Death by Chocolate! Even though the premise says Jake and Ellie co-own the bakery, I felt like Jake was the main character here. I really resonated with her and her quirky personality. What a likable gal! And that is what you want in a story, people you resonate with whom you can follow and solve the mystery with. Enjoyed the heck out of this. Looking forward to book 4 (and books 1 & 2!)

I really think Graves and Alex Erickson should get together and do a collab. I mean Death by Chocolate and Death by Coffee. What a great match that would be!

I received this as an ARC (Advanced Reader Copy) in return for an honest review. I thank NetGalley, the publisher and the author for allowing me to read this title.
Posted by Toni at 1:58 PM