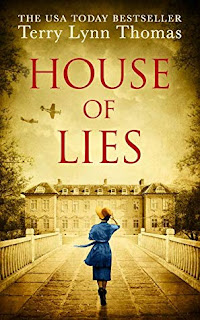 In a time of war, nowhere is safe…
While World War Two rages, Cat Carlisle runs a women’s refuge to protect beaten wives. But when one of the women is found dead in the woods behind the house, Cat’s world shatters.

Was the killer a violent husband seeking revenge? A secret lover? Or is something more dangerous at play? Because Cat and her fiancé Thomas have a secret: they’re hiding a precious golden chalice, keeping it locked safely away from the plundering Nazis until the war is over. But someone wants that treasure, and no one will be safe until they get it…

This is the third book in the Cat Carlisle series by Terry Lynn Thomas.

Wow, what an intense and great historical cozy mystery!

This is my first foray into the world of Cat Carlisle. Set in the 1940’s in refuge for suffering women, Cat accepts wayward women into her home.  One such woman has a husband who is a very bad man who figures prominently in the case her boyfriend and officer of the constabulary is working concerning a jeweled chalice.

We are also introduced to Hugh and his wife Margaret. The book starts off with their story and since this was my first venture into this world, I originally thought they were the stars of the show. I discovered later that this was Cat’s book. Hugh has been separated from his partying wife and has just found out she swindled him out of much of his inheritance. Thanks to his mother’s interference, she didn’t get all his money but his mother put him on a stipend that would reign in their spending, During this time there is food rationing and some people are going without a lot of the necessities. This was a interesting side step into the couple’s life and I am not sure it had a ton to do with the mystery of the book. But it did play a slight part giving us a great amount of background.

The mystery started with a death of one of the girl’s at Cat’s woman’s refuge. They learn this woman was taking advantage of Cat’s kindness and using her. This story took the long way home so to speak. We learn all sorts of things about these people. The setting and cast is amazing, I loved the entire atmosphere.

I hope there are more books after this one but it almost felt like an ending of sorts.

If you love a good historic cozy mystery, you have to check this one out. You won’t be disappointed.

I received this as an ARC (Advanced Reader Copy) in return for an honest review. I thank NetGalley, the publisher and the author for allowing me to read this title.
Posted by Toni at 7:56 AM