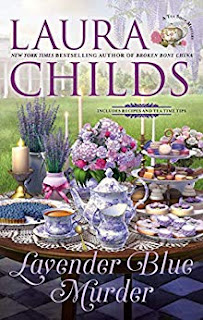 But as gunshots explode like a riff of Black Cat firecrackers, another shot sounds too close for comfort to Theodosia and Drayton. Intrigued but worried, Theodosia wanders into the neighbor's lavender field where she discovers their host, Reginald Doyle, bleeding to death.

His wife, Meredith, is beside herself with grief and begs Theodosia and Drayton to stay the night. But Theodosia awakens at 2:00A.M. to find smoke in her room and the house on fire. As the fire department screams in and the investigating sheriff returns, Meredith again pleads with Theodosia for help.

As Theodosia investigates, fingers are pointed, secrets are uncovered, Reginald's daughter-in-law goes missing presumed drowned, and Meredith is determined to find answers via a séance. All the while Theodosia worries if she's made a mistake in inviting a prime suspect to her upscale Lavender Lady Tea

This is the 21st book in the A Tea Shop Mystery series by Laura Childs. Wow. twenty-one books in this series. Talk about longevity How cool is that? I haven’t read too many of these Tea Shop mysteries but I am totally loving them! I have a couple of hardbacks in my collection that I really need to get back to!

This was a pretty involved mystery. First a man in the hunting party gets killed and then before the next dawn there is a fire in the place many are staying. It’s just one thing after another.

The Gone With the Wind Tea Party was a pretty clever event for the tea shop. And the Lavender Lady Tea was just so posh. If there are any tea shop owners out there, you could look to this book for inventive ways to put on tea shop events.

Theodosia is a protagonist that I think many can relate to. It is easy to see yourself in these situations and making similar choices as the mystery pushed forward. There was so much sleuthing going on that I could barely keep track of all the clues. My whodunit skills were not on point and I had no idea to the identity of the killer and what motive they might have.

One part I found a bit odd was when they wanted to do a police stakeout at a party with a bunch of people present. I though that funny since if I was the police, I don’t think I would want to put that many people in possible danger. Other than that, this was a great mystery that kept me on my toes all the way throughout. I definitely want to keep this series on my radar. I think a marathon might be in order. I hope my library has many of the older books.

I received this as an ARC (Advanced Reader Copy) in return for an honest review. I thank NetGalley, the publisher and the author for allowing me to read this title.
Posted by Toni at 8:59 AM