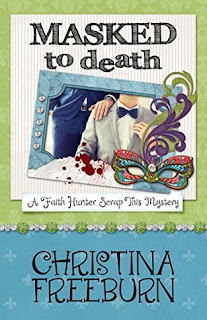 Goodreads synopsis:
A Caribbean cruise is the perfect setting for a Roget wedding, and Faith meeting Ted’s family. She also hopes the vacation gets their stalled romance moving, but it doesn’t take long for that dream to capsize. Ted’s daughter hates her. The ex-wife is adored. Odessa Roget is surly. And the banned father of a groom, John Roget, requests Faith’s assistance in bringing down a jewel theft ring masterminded by his ex-wife.

Having had a man she loved accuse her of a crime, Faith won’t let Odessa travel down the same path and agrees to help. Faith sets her course on uncovering the true criminals—which might be a groom’s best friend. The romantic week turns disastrous as a wedding is interrupted, suspicious deaths point to murders, and Ted’s daughter schemes to reunite her parents. Instead of diamonds being a girl’s best friend, Faith finds they’re cruising toward Davy Jones’ Locker

This is the fifth book in the Faith Hunter Scrap This Mystery series by Christina Freeburn.

I have to admit I was not the biggest fan of Ted Roget during this book. That is unusual for me since I have a detective book boyfriend in nearly ever cozy mystery series I read. I had been jumping around in this series and did not read it in the correct order. Sometimes reading in order can make a big difference when understanding romantic dynamics.

Basic premise: Faith went on a cruise with Ted under the guise of meeting his family but what she found almost seemed to pull the couple apart forever. Ted’s young daughter hated her. She tried during the entire cruise to get her parents back together and thus thwarted Faith’s attempts to find alone time with Ted at every turn. I loved that Ted’s dad, John, ended up on the cruise as well and elicited Faith’s help in his own case involving a jewel theft ring.