MURDER IN THE SECRET MAZE (A Tory Benning Mystery, #1) by Judith Gonda 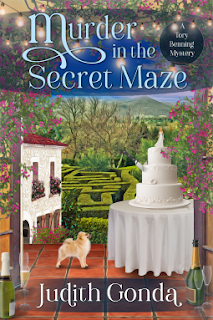 MURDER IN THE SECRET MAZE
(A Tory Benning Mystery, #1)
by Judith Gonda

Landscape architect Tory Benning knows the lay of the land, but she’ll have to dig through the clues to unearth a killer . . .

After a whirlwind romance and a glorious wedding at the luxurious Hotel Santa Sofia, Tory Benning is ready to let down her hair, slip into her dancing shoes, and celebrate—until she discovers that her newly minted husband has vanished. The police suspect cold feet and second thoughts are behind Milo’s disappearance, but Tory’s certain he’s met with foul play. And since she designed the plush resort, she knows every nook and cranny of the grounds and adjoining secret maze, and wastes no time delving into her search.

As clues begin to emerge that Milo may have taken his last breath in the maze, Tory steps up her sleuthing, even as she learns she’s the prime suspect of a cop with a chip on his shoulder and is squarely in the sights of a menacing stalker. And when a second body is found on the grounds, Tory fears she’s up against a killer determined to silence any and all who get in the way.

Not to be deterred, Tory forges ahead, navigating a case with more twists and turns than the maze itself, until the labyrinth of clues leads her to shocking revelations about her husband, her family, and the identity of a killer who’s dead set on making her the next victim . . .

This is the first book in the Tory Benning series by Judith Gonda.

On the surface this started out as what looked like a missing person’s case. Tory and her love, Milo had just gotten married and before the groom even made it to the reception, he disappeared. Murder was suspected since blood was found in the Secret Maze at the hotel where the wedding had taken place.  Tory immediately becomes suspect number one especially to one of the cops investigating the case. He seemed to have a problem with Tory and was looking more for a promotion to a higher level in the police department than looking for the actual true killer. Adrian, however, was the other cop on the case and her BFF Ashely’s almost boyfriend.

One thing did worry me. Tory spent so much time avoiding the disgruntled cop that I wasn’t sure if that would be realistic in the real world. I was surprised the man didn’t just jail her to be a thorn in her side. The investigation was quite stellar and I was pulled along wondering the entire time if someone from her own family would kill her husband on their wedding day. This book really keeps you on your toes.

I had to laugh when Tory explained her family akin to a soap opera when a lot of surprising family details were finally revealed to her all in one fell swoop. Before the book began her father had died and the investigation into his death was ongoing. Then Milo disappeared at the wedding venue and another Aunt that Tory never knew about ended up dead as well. Seemed like Tory’s world was truly imploding. A little bit of overkill in my opinion but that didn’t lessen the impact of the storyline. It was a compelling read that I couldn’t pull my eyes from.

Once you get into this, plan to read it till the end. You won’t want to stop until the killer is uncovered. What a roller coaster ride this was. Soap opera surely describes this to a T. If Tory does find a missing twin in book two, I wouldn’t be surprised. Can’t wait for the next book in the series. I am hooked already!