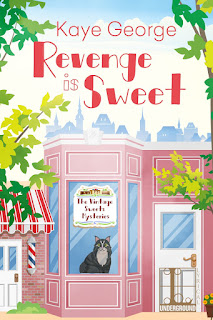 Goodreads synopsis:
In the picturesque tourist town of Fredericksburg, Texas, Tally Holt has opened a new candy store with a vintage twist . . .but there’s no sugar-coating a nasty case of murder . . .

Tally Holt has poured her heart, soul, and bank account into Tally’s Olde Tyme Sweets, specializing in her grandmother’s delicious recipes. Tally’s homemade Mallomars, Twinkies, fudges, and taffy are a hit with visiting tourists—and with Yolanda Bella, the flamboyant owner of Bella’s Baskets next door. But both shops encounter a sour surprise when local handyman Gene Faust is found dead in Tally’s kitchen, stabbed with Yolanda’s scissors.

The mayor’s adopted son, Gene was a handsome Casanova with a bad habit of borrowing money from the women he wooed. It’s a sticky situation for Yolanda, who was one of his marks. There are plenty of other likely culprits among Fredericksburg’s female population, and even among Gene’s family. But unless Tally can figure out who finally had their fill of Gene’s sweet-talking ways, Yolanda—and both their fledgling businesses—may be destined for a bitter end . . .

This is the first book in the Vintage Sweets mystery series by Kaye George.

I enjoyed the complete mystery in this book as well as the theme of vintage chocolates. It never occurred to me that we could make our own versions of older treats. This would have been the perfect book for a recipe since I think the older readers among us would love to taste a bit of our own history.

Tally has started a vintage chocolate shop. Her shop next door neighbor is Yolanda at Bella’s Baskets. When Tally’s refrigerator goes out, she brings in handyman Gene who just happens to be the mayor’s adopted son. And this guy is quite the player. He must be dating like five different people. I am not certain how such a smooth talker can get away with so much deception, especially in a small town. Anyway, someone has enough of his sweet words and betrayal and plunges Yolanda’s conveniently placed scissors into his back. Now Yolanda is suspect number one. Not to mention, she was the one to originally find Gene’s body yet didn’t report it. Tsk. Tsk. That is just asking for the police to slap some cuffs on you straight away.

There was a clue found in Tally’s shop near the middle of the book that caused the police to slap some actual handcuffs onto Tally. I didn’t quite understand why. She really wasn’t a suspect at that point and so many people had access to her chocolate shop it wasn’t funny. Those types of red herrings just tick me off sometimes. I like to believe in the goodness of the main characters and I want all the book people to believe in their goodness as well. Of course, I don’t always get what I want. Dang criminal element!

I am super excited about this new series. I don’t think I have ever read anything by Kaye George before either. Double win. Great find for me! Definitely adding this to my must read list for the future!

I received this as an ARC (Advanced Reader Copy) in return for an honest review. I thank NetGalley, the publisher and the author for allowing me to read this title.
Posted by Toni at 2:16 PM