Seeds of Revenge (A Greenhouse Mystery #3) by Wendy Tyson 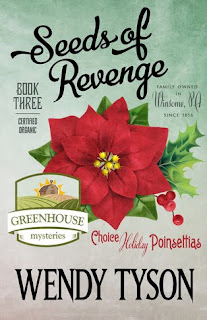 Seeds of Revenge
(A Greenhouse Mystery #3)
by Wendy Tyson

Goodreads synopsis:
It’s the holiday season, and the mood in Winsome is anything but jolly…

Megan Sawyer is determined to farm year-round. She’s braving a December snowstorm after pitching her greenhouse greens to Philadelphia chefs when she sees a stranger stranded on the side of the road. It’s Merry Chance’s niece Becca, who’s headed to Winsome to sell her “love potions” at holiday events—or so she thinks.

Merry has an ulterior motive in inviting her niece to Winsome, but Merry’s plan to reunite Becca with her estranged father goes awry when Becca’s father turns up dead. Megan soon realizes that Becca was not the only person in Winsome who despised her father. When Megan’s aunt, the famous mystery author, is implicated through her novels, things become personal. Megan must follow the literary clues while sifting through the victim’s sordid past, but can she uncover the truth before someone else in Winsome is murdered?

This is the third book in the A Greenhouse Mystery series by Wendy Tyson.

This is another one of those series that first pulled me into the cozy genre. I really enjoyed this garden mystery with all its revenge and angst.

In the town of Windsome, things aren’t always what they seem as our main character has learned. Megan Sawyer, is trying to make her greenhouse into a year round endeavor. When she comes back from a trip to Philly, she rescues a stranded motorist and thus gets pulled into the lives of Becca and Luke Fox. There is just something a little bit off about Becca and Luke  but Megan can’t put her finger on why.

Becca has started a perfume business that features products made with pheromones. Becca and Luke look like a happy family on the surface but everything is far from okay. Megan’s friend Merry invited Becca to town in order to reunite her with her estranged father. Then the father, Paul Fox ends up dead. This Paul fellow was quite the rascal and up to no good for most of his life.

Then a surprising connection is discovered between the murder and Megan’s aunt, Sarah, who is a mystery author. She ends up on the suspect list too along with practically every one else in town.  As you can tell, this is not a mystery easily solved.  So much going on here. I just loved it. It felt so good to get back to the older series that called out to me back in the beginning of my cozy journey.

Good to see Denver/Daniel back in the saddle and the connection between him and Megan is just what makes life tick for me. Wish I had something like that in my own life. The loving connection between them sort of balances the not so nice aspects of the murder and dead bodies that keep cropping up. And then her friendship with Bobby King, police chief, made me smile every time he came on stage. Loving the whole recurring cast here. So friendly and homey.  This series is a sure keeper. Going to finish reading the books I have not gotten to and hope to read on Wendy’s other series, the Allison Campbell mysteries when I finish with that.

I received this as an ARC (Advanced Reader Copy) in return for an honest review. I thank NetGalley, the publisher and the author for allowing me to read this title.
Posted by Toni at 9:26 AM