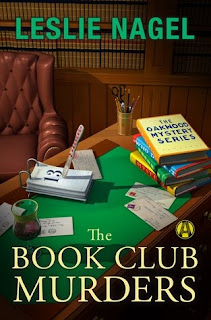 Charley Carpenter has poured heart and soul into her clothing store, Old Hat Vintage Fashions. She’ll do anything to make it a success—even join the stuffy Agathas Book Club in order to cultivate customers among Oakwood, Ohio’s wealthy elite.

Although mixing with the most influential women in town has its advantages, Charley finds the endless gossip a high price to pay. But after two women with close ties to the Agathas are brutally murdered, everyone falls under threat—and suspicion. When key evidence indicates that both murders are the work of the same hand, Charley realizes that the killer has arranged each corpse in perfect imitation of crime scenes from the Club’s murder mystery reading list. She uses her membership in the Club to convince Detective Marcus Trenault to use her as an inside informant. Not that he could stop her anyway.

Intelligent, fearless, and every bit as stubborn as Marc is, Charley soon learns the Agathas aren’t the only ones with secrets to protect. Passions explode as she and Marc must race against time to prevent another murder. And if Charley’s not careful, she may find herself becoming the killer’s next plot twist.

This is the first book in the Oakwood Mystery series by Leslie Nagel. I think the name the Agathas Book Club Mystery series would be a more appropriate series title, but that is just me.

This is a schooling on how to plot the perfect murder using your favorite mystery novels. It seems someone in the Agathas Book Club is killing off people tied to their membership. They are cleverly using scenes from the books on the book club’s exclusive list. Detective Marcus (Mark) Ternault is on the case and Charley Carpenter, the owner of the Old Hat Vintage Fashions store and Agathas member is right by his side. These two have an on again, off again type of relationship. But the more Charley sticks her nose into things, the more annoyed Mark gets. He is confused by his growing feelings for Charley and her involvement in the case.

Until the killer’s identity was revealed near the end, I had no clue who it might be. I think I was zoned in more on the relationship between Mark and Charley than following the clues to the mystery.m I enjoyed  how they used the plots in books to set the murder scene. I can’t wait to get to book two in this series and see where everything goes from here. Definitely liking a majority of the players here. Such a fun series. It is one I want to continue to follow.

I received this as an ARC (Advanced Reader Copy) in return for an honest review. I thank NetGalley, the publisher and the author for allowing me to read this title.
Posted by Toni at 8:33 AM