The House of Memory (Pluto's Snitch #2) by Carolyn Haines 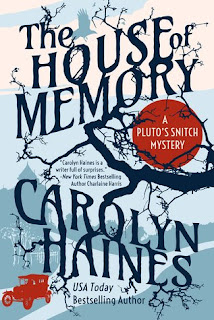 The House of Memory
(Pluto's Snitch #2)
by Carolyn Haines

Goodreads synopsis:
Raissa James not only sees the dead but she’s caught the ears of the living—especially now that she’s solved her first case. Word of Pluto’s Snitch, her private-investigation agency specializing in the occult, has spread far and wide. It’s even come to the notice of Zelda Fitzgerald, the nation’s most celebrated flapper. And Zelda’s in need of its services.

Along with Reginald Proctor, her partner in detection, Raissa travels to Montgomery, Alabama, where Zelda’s friend Camilla has suddenly become prone to violent fits and delusions. Has Camilla gone mad…or has she been possessed?

Raissa and Reginald soon discover that Camilla’s not the only young lady in the area to fall victim to something unnatural. Now it’s up to the Snitches to follow the clues and save Camilla, locked away behind the walls of the formidable Bryce Hospital asylum. But the key to her rescue might not lie among the living at all. Because Raissa knows that the dead have their secrets, too.

This is the second book in the Pluto’s Snitch series by Carolyn Haines.

I am not sure why I have never heard of this series before. It is an amazing piece of work. I just love the whole concept of the spooky, paranormal-ish series set in the 1920’s flapper age.

Raissa James and her cohort Reginald Proctor are called in to assist the wife of F. Scott Fitzgerald, Zelda. Her friend, Camilla is soon to be married but when she went to the new estate her soon to be husband bought for her, she turned unexpectedly violent and tried to kill him. Now she has been put into an asylum to have part of her brain cut out to make her more docile. Zelda wants to help her friend and has called in Raissa and Reginald to figure out what is really going on.

I think I like the setting almost as much as I did the whole mystery of it all. The setting almost becomes its own entity here and I am enthralled with this new to me series. I plan on doing a marathon as soon as I can compile all the rest of the books in the series.

Loved this so much! You think you know who is involved and then there is a twist at the end that blows your theories out of the water. So good! I hope more people discover this stellar series!

I received this as an ARC (Advanced Reader Copy) in return for an honest review. I thank NetGalley, the publisher and the author for allowing me to read this title.
Posted by Toni at 7:32 AM