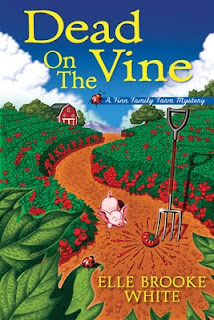 Charlotte Finn never wanted to inherit the family's produce farm--much less plow a heap of money into it. Her plan is to hammer a great big FOR SALE sign into the farm's fallow furrows--but Charlotte's sunny hopes of a quick sale succumb to a killing frost when she finds a dead body entwined supine in the tomato vines. The poor man, it seems, was run through...with a pitchfork?

Now, Charlotte is stuck with running the farm in the midst of a murder investigation. Charlotte's knowledge of farming is smaller than her bank balance, so she relies on caretakers Joe and Alice Wong and their farmhands. Can she trust them? She doesn't know them. There's also farmer Samuel Brown, who still carries a childhood grudge. But the case gets personal when Charlotte learns that the victim might have been her own kin--and seeds of suspicion grow into a fertile field of suspects.

Charlotte turns to the farm's baby pig to help root out the killer. Soon, the goats, geese, and horse join in, but will Charlotte harvest a murderer--or buy the farm?

This is the first book in the Finn Family Farm mystery series by Elle Brooke White.

Basic premise:  Charlotte inherits a produce farm. She plans to sell it but she finds a dead body among the tomato vines properly nixing that idea. She doesn’t really know anybody in town and surely doesn’t know who to trust. Now she has to wait until the murder investigation is over to sell. In the meantime, she discovers that her pig named Horse is way smarter than anyone realizes. So, she and Horse decide to investigate on their own.

This book is a hoot and a half once the pig is introduced. The premise didn’t seem lame or unlikely as I was reading it. It seemed perfectly natural that she could understand what the pig was saying to her through his actions.

I could totally see a watered down version of this story as a children’s book.

If you love a good cozy mystery, definitely check this one out. It is a winner!