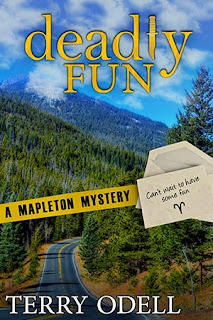 Someone is playing a game with Mapleton’s Chief of Police … and it’s deadly.

For Mapleton Police Chief Gordon Hepler, life has become predictably boring—despite being a newlywed. Being a husband is great. Dealing with nothing but parking violations, speeders, and the occasional disorderly complaint is monotonous. Gordon wonders if he’s been so busy dealing with “Chief Stuff” that he’s lost his edge as a street cop. Especially when his biggest challenges are handling the penny-pinching mayor and deciding what goes into the station’s vending machines. A few anonymous prank letters are about the only ‘non-normal’ things to hit his desk, and even those pose no apparent threat.

When a tragic car accident kills a friend, Gordon soon learns it was no accident. Determined this is the case meant to pull him out of his workplace rut, Gordon delves into the investigation. He and his colleagues uncover a string of similar murders all across the country over the last 20-odd years. Then, going through a victim’s personal effects, Gordon discovers the same type of anonymous letters that he’s been receiving. Now it’s a race against the clock to find the killer before another victim is chosen.

Or is Gordon the next casualty on the killer’s list?

I think the blurb for this book totally over hypes how “bored” Mapleton’s police chief is. I didn’t feel that vibe at all really. When he himself receives an unusual letter in the mail, he overlooks it as not important. Later when a man in what seems to be a simple automobile accident has a similar letter in his possession, Gordon knows that something fishy is going on.

We don’t realize how important this letter is until later and what the mysterious “V” or “Aries” Symbol really means. As time goes on in the investigation, more people are discovered to have received a similar note right before their untimely demise.

This story really hooks you and keeps you interested until the end. What a roller coaster of an investigation! I particularly enjoyed how the author paired Gordon’s personal life and the police stuff together. It all felt so natural and effortless. This totally didn’t seem like the ninth book in a series. It still felt very fresh and new. I am totally going to go back and read books 1-8 since this book so intrigued me!

If you love a good police procedural/detective fiction, definitely check this one out! Recommended!

I received this as an ARC (Advanced Reader Copy) in return for an honest review. I thank NetGalley, the publisher and the author for allowing me to read this title.
Posted by Toni at 8:20 AM