Murder to Music by Margaret Newman 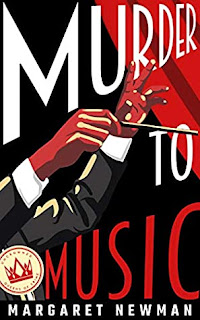 Murder to Music
by Margaret Newman

Goodreads synopsis:
'You must have a curious taste, to love someone whom you believe to be capable of murder.’

Detective Superintendent Simon Hudson finds himself in a difficult position. Attending the Metropolitana Choir’s concert was intended to make him a supportive partner… not the head of a murder investigation. But when the conductor drops dead during the performance, Hudson winds up with a shocking list of suspects – including his girlfriend.

Unable to keep his professional and personal lives separate, Hudson finds himself embroiled in the peculiar hatreds and spiteful grudges that dominate the Metro’s managing committee. Desperate to ensure his girlfriend’s innocence, Hudson must work quickly to bring the murderer to light before it’s too late.

This melodic murder mystery, brimming with charm and wit, was first published in 1959 and was Margaret Newman’s first novel.

I am pretty sure this is a standalone novel. It is written by Margaret Newman.

After I read this, I discovered it was originally published in 1959. I was surprised by that since this book didn’t read as if it was written so long ago. It felt fresh and new. How awesome is that? That is the sign of a good writer!

I had a jaw dropping moment reading this when after the conductor is killed on stage, the detective has no qualms announcing that his girlfriend, who is in the choir, is a suspect. Considering he is most likely her alibi, I found that quite humorous.

The mystery was quite complex considering the killing was done in sight of everyone. I really liked the setting of being in a choir since that is a very familiar place to me since I am currently in a worship team.

The characters were easily distinguished from one another but I was most curious about the relationship between Detective Hudson and Delia Jones. I wish there had been more interaction between the two of them. but that is just me wanting a bit more romantic suspense in my cozy. Overall, it was one great read.

I received this as an ARC (Advanced Reader Copy) in return for an honest review. I thank NetGalley, the publisher and the author for allowing me to read this title.
Posted by Toni at 10:20 AM