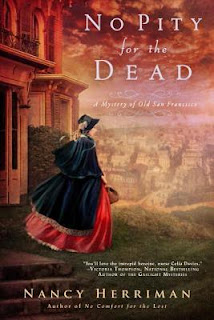 Goodreads synopsis:
The author of No Comfort for the Lost returns with a new mystery of Old San Francisco...

British-born nurse Celia Davies runs a free medical clinic to assist the poor women of San Francisco. Aided in her endeavors by her half-Chinese cousin Barbara and feisty housekeeper Addie, Celia has earned the trust and friendship of many of the city’s downtrodden, including a young orphan named Owen—who’s just confided to her that he’s stumbled upon a corpse.

Owen recently started working for the ruthless real estate and development group, Martin and Company, and discovered a dead body in the office’s basement. Celia turns to Detective Nick Greaves for help, only to learn that one of the main suspects—the husband of Celia’s dearest friend—is an old enemy of Nick’s.

Now, Celia and Nick must put aside their personal feelings about the case—and each other—if they’re going to bring a killer to justice...

This is the second book in the Mystery of Old San Francisco series by Nancy Herriman.

This book is set in the post Civil War era. Celia Davis is a nurse that runs her own clinic just for women. On the side she solves a mystery or two in her spare time. A young boy, Owen, whom Celia has taken under her wing tells her about a dead body he saw in the basement of the place where he works. He and another fellow were in the basement digging for gold and discovered the corpse. Celia turns to Detective Nick Greaves whom she has a bit of a crush on for assistance with the case.

I feel like the best part of this story was all the world building the author did. That made it all feel so authentic and really thrust me into the story full force. I was all in once I figured out who was who. I have not read book one but I do plan to put that on my TBR since this was such a stellar read.

I think Nick Greaves is right up there with some of my favorite fictional detectives. He and Celia have this kind of Moonlighting thing going on where they are very attracted to each other but don’t really act on those feelings. I like the dynamic between them. In truth, she should probably be the detective since she has a better understanding of the investigation aspect and how to go about figuring out whodunit than any of the other police officers. But I think Nick could give her a run for her money.

This investigation was interesting and I never found myself bored with it. I enjoyed how the author paired the character building with the mystery. Such a fun read. I read this book in anticipation for the next book in the series which comes out on March 3rd called No Quiet Among the Shadows.

If you love a good historical cozy mystery, you have to check this one out. You won’t be disappointed. I was hooked all the way through and then read the next book in the series immediately after I finished this one. Good stuff!