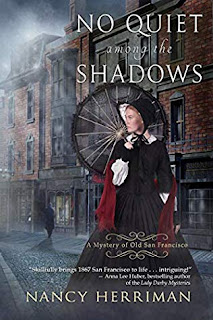 Goodreads synopsis:
In a new Mystery of Old San Francisco, Celia and Nick must look for answers among the dead to stop a killer among the living . . .

With the city’s Fourth of July celebrations in full swing, Celia Davies has stolen a moment away from her nursing duties to take in the festive spectacle, but is stunned when she spots the one person she thought she’d never see again—her supposedly dead husband, Patrick. Moments later, the investigator who had confirmed Patrick’s death is killed when he suspiciously falls from a high window, and Celia begins to fear that the roguish man she married has returned to haunt her life once again.

Joining forces with Detective Nick Greaves to get to the bottom of the mystery, Celia is soon drawn into a murky séance group, where the voices of the dead suggest that everyone involved in the case is engaged in some sort of fraud or deception. Determined to discover which of them might be a murderer, Celia and Nick will find themselves following a trail of clues that leads them down dark alleys into a shadowy tangle of spiritualism, altered identities, traumatic pasts, and secrets worth killing for . . .

This is the third book in the Mystery of Old San Francisco series by Nancy Herriman.

This book is set in the post Civil War era. Celia Davis is a nurse that runs her own clinic just for women. On the side she solves a mystery or two in her spare time.

Celia was invited to the fourth of July festivities by Detective Nick Greaves at the end of the previous book but she has to take care of one of her young charges and has to cancel her date (I am not sure they would called it that). She does manage to see a bit of the parade as it is completing. Earlier, she had received news from the investigator she hired that her husband, Patrick was indeed dead. Then during the parade, she sees Patrick on the street talking to someone. He’s only there for a second and then he’s gone. Later she discovers that someone has killed her investigator. Celia splits her time between finding out who killed her investigator and whether or not Patrick is really alive and maybe involved in the murder.

These two books (bools #2 & #3) flowed perfectly together that I almost feel like they were written at the same time. I am enamored with Herriman’s pre-Civil War San Francisco and all the characters she has created within. Sometimes a historical cozy can seem dry and unappealing but that is not the case with this series. The characters just come alive on the page. Sometimes I feel like I am almost watching them on television instead of reading about them in a book. This series would definitely do well on tv, I think.

The mystery really kept me engaged and the scenes in the mental hospital were so sad. Nearly all those people they kept inside the facility surely didn’t need to be there. The mental health profession sure has come a long way. I was really rooting for Celia during this story to figure it all out. I mean, there is no doubt really, but I was certainly on the edge of my seat the entire time I was reading this.

If you love a good historical cozy mystery, you need to pick this one up. You won’t be disappointed. I was hooked all the way through. I wonder how long it will be until book four. Good stuff!

I received this as an ARC (Advanced Reader Copy) in return for an honest review. I thank NetGalley, the publisher and the author for allowing me to read this title.
Posted by Toni at 9:20 AM