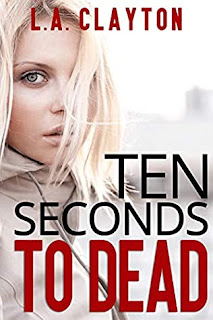 Goodreads synopsis:
Ten seconds may be all she has left ...

Kate Edison witnesses her father’s death and, in order to keep his memory alive, decides to follow in his footsteps by joining the CIA. She molds herself into becoming exactly what the CIA is looking for---and captures their interest, both personally and professionally. But before she can finish the CIA process, Kate is offered a position as an espionage agent in another highly secretive government agency, which she accepts.
While completing her agency training, Kate is catapulted into a shadowy world where wealth and power are the ultimate goal, and those in charge will stop at nothing to get it.

While on the job, Kate uncovers secrets that, if revealed, would cost her life, but if kept, could bring down a nation. Isolated and unsure of who to trust, she brings in a fellow agent, but pulling him into the web of conspiracy and lies puts a target on both their backs - and it will take every skill they’ve ever learned as agents to stay alive long enough to stop the enemy no one else can see.

This is the first book in the Ten Seconds series by L.A. Clayton.

Wow. Just wow. This is like watching an entire series of Alias all in one go! Just a wonderful read. I am excited to see what more this debut author has to offer. She already has put the finishing touches on book two of this series. I got a sneak peek at the end of this book and am ready to dive into TEN SECONDS TO PANDEMIC right now. How fitting that it really resonates with the pandemic we are currently facing. Maybe Clayton has a bit of a prophetess in her.

Basic premise: Kate has wanted to be a part of the CIA since she was 16 and her father, who was also in the CIA, died unexpectedly. She goes through the rigors of testing and comes out on top only to have the choice taken away from her. She is forced into an ultra covert agency that initially looks on the up and up and eventually she realizes what she has really gotten herself into.

The action in this is kick butt awesome and I was glued to the page the entire time. It was an unputdownable read for sure! I particularly liked the addition of Officer Lyons, the man who brought her in for the original CIA testing. He was majorly miffed when it seemed she dropped out from the running the minute she crossed the threshold to be invited to be a part of the CIA. Having him in the story really grounded it for me and made look forward to every time he had an appearance.

I wanted this book to last longer than it did even though it is nearing 400 pages. I just couldn’t get enough of this story! So excited to find a great author who just gets me and gives me the types of stories I like.

If you enjoy a good romantic suspense thriller, definitely give this one a try, you won’t be disappointed! This is more suspense & thriller than romance but there is a nice romance element to this book.

I received this as an ARC (Advanced Reader Copy) in return for an honest review. I thank NetGalley, the publisher and the author for allowing me to read this title.
Posted by Toni at 7:40 AM