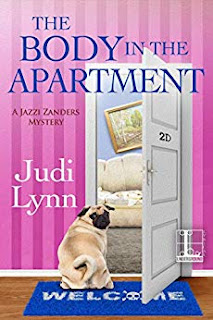 Goodreads synopsis:
The charming homes of River Bluffs, Indiana, make perfect projects for house-flipper Jazzi Zanders. Less charming is her hothead brother-in-law, who's a bit of a fixer-upper himself.
But could he also be a murderer?

Jazzi married her gorgeous contractor Ansel—not his family. But somehow she keeps living with them. So she's delighted to help Ansel's brother Radley move out of their home and into his own place, in the same building as his work supervisor, Donovan. But when Donovan is shot and his apartment ransacked following an argument with Ansel and Radley's older brother Bain, their sibling becomes a suspect—especially after his missing gun turns up as the murder weapon.

Told not to leave town by Detective Gaff, big brother moves in with . . . Jazzi and Ansel. Now Jazzi needs to prove Bain's no killer, not only to keep him out of jail—but to get him out of their house. What was the killer looking for in Donovan's apartment? And what will happen to the next person who gets in the way?

This is the fourth book in the Jazzi Zanders mystery series by Judi Lynn.

What a fun and enjoyable read. This book is filled with so many foodie ideas for meals that I think this is my favorite part of the book. Just seeing what Jazzi will cook up is a crazy ride all in itself. I think I need a Jazzi Cooks cookbook.

Basic premise: Ansel’s brother, Radley has decided to stay in town and leave the farm and his brother and father behind. When they try to move him into the same building as his supervisor, Donovan, they find Donovan shot and dead in his apartment. Then Radley’s brother, Bain shows up trying to drag his brother back to the farm. Turns out the gun used to shoot Donovan was taken from Bain’s truck. Now he is stuck in town until the police will let him return home. Then Bain moves into the guest room at Jazzi and Ansel’s house much to Jazzi’s dismay.

I have read one other book in this series, but I find it a bit odd that Detective Gaff is always having Jazzi ride with him when he meets suspects. I am not sure that would happen in real life. I would more believe that Gaff has a crush on Jazzi and is just wanting to spend time with her. But since I haven’t read all the previous books, I am not completely certain of his intentions. I do enjoy a good Gaff scene, though. Detectives are my guilty pleasusre!

The book was interesting and it really kept my attention all the way though. The characters are all distinct and I know who they are when they enter a scene. This is nice since we don’t always get to know the minor characters very well due to their limited involvement with the plot.

I thought having Bain there as a foil for Jazzi and Ansel’s romantic time was pretty funny. Every time they wanted to get together, there he was. I wonder if he will show up in future books. I totally loved how Walker adopted Didi and her son and then ended up falling for her. Would have loved to see more of that, for sure!

If you love a good cozy mystery definitely check this one out. You won’t be disappointed.