The Boy from the Woods by Harlan Coben 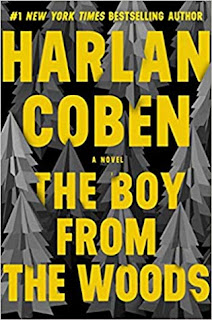 The Boy from the Woods
by Harlan Coben

Goodreads synopsis:
In the shocking new thriller from the #1 New York Times bestselling author of Run Away, a man whose past is shrouded in mystery must find a missing teenage girl before her disappearance brings about disastrous consequences for her community . . . and the world.

The man known as Wilde is a mystery to everyone, including himself. Decades ago, he was found as a boy living feral in the woods, with no memory of his past. After the police concluded an exhaustive hunt for the child's family, which was never found, he was turned over to the foster system.

Now, thirty years later, Wilde still doesn't know where he comes from, and he's back living in the woods on the outskirts of town, content to be an outcast, comfortable only outdoors, preferably alone, and with few deep connections to other people.

When a local girl goes missing, famous TV lawyer Hester Crimstein--with whom Wilde shares a tragic connection--asks him to use his unique skills to help find her. Meanwhile, a group of ex-military security experts arrive in town, and when another teen disappears, the case's impact expands far beyond the borders of the peaceful suburb. Wilde must return to the community where he has never fit in, and where the powerful are protected even when they harbor secrets that could destroy the lives of millions . . . secrets that Wilde must uncover before it's too late.

Wow! What a great book!

This book is the first in what I hope is a new series by Harlan Coben. One can dream, right?

I have mixed feelings about the title of this story. It is not technically about The Boy From the Woods. I think I was expecting to read a story about a youngster who survived the wilds of the woods and how that experience changed him.  It is sort of about that. But here we see the grown up man who used to be the boy in the woods. I like how he goes about the investigation into the missing teen since it is so different than the normal  you usually see in a book like this.

However, Wilde is not the only ‘main character’  here. In the beginning that title is split between Wilde, TV lawyer Hester Crimstein and her grandson Matthew. Hester is the one who gets Wilde involved in the case. Matthew is the one who knows the missing girl and is connected to many of the players in the story.

Wilde’s experiences in the woods as a youth still colors his everyday life. He doesn’t really get involved romantically with women. He is more of the guy who gets his needs fulfilled and goes back to being alone. Even when he is with someone, he never stays the night in the bedroom. He feels more comfortable sleeping outside under the stars. Because of all his quirks, this is a pretty entertaining read. You never get what you expect. Even when you think you know how all the circumstances play out, Coben surprises is again with a last minute surprising revelation… or two or three. If you are the type who skips the end because you think you know it all, don’t bypass this one. You will miss out on a ton of insight and character growth.

Just loved this so much. I am hoping for a series. Did I say that already? :)

If you love a good mystery/thriller, you need to pick this one up. You won’t be disappointed. I was hooked all the way through. Good stuff!