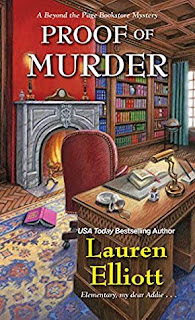 The seaside New England town of Greyborne Harbor is home to many grand estates, including the Queen Anne Victorian Addie inherited from her great aunt. Now one of those mansions is holding an estate sale, which is just what the bookshop owner needs to replenish her supply of rare editions—even if the house is rumored to be haunted. Assisting an overwhelmed insurance appraiser with the inventory, Addie discovers an 1887 magazine containing Arthur Conan Doyle's first Sherlock Holmes novel, A Study in Scarlet, which she estimates to be worth over one hundred and fifty thousand dollars.

But when Addie later finds the appraiser dead in the estate's private library, with the door bolted from the inside, and the priceless edition missing, it's a mystery worthy of the Great Detective himself. She's certain the death and the robbery are connected—but who, other than a ghost who can walk through walls, could have gotten in to do the deed? It's up to Addie to find the key to the crime—before she's the next one cornered by a killer . . .

This is the fourth book in the Beyond the Page Bookstore mystery series by Lauren Elliott.

Basic premise: It’s a locked door mystery. Addie and her cousin was helping her friend appraise a whole lot of books some of which were extremely expensive. Then they discover the woman dead in the locked room and some of the expensive editions missing. Not to mention her cousin was also on the missing list.

Addie tried to explain about the missing first editions and priceless proof copies of A Study in Scarlet but no one seemed to take her expertise into consideration. It is like she was the main suspect even before they walked in to view the body.

I have to say I was waffling between shocked and boiling mad when Addie’s old flame police chief Marc Chandler went from asking for her hand in marriage in the last book to now whisking away a sultry FBI agent to an Italian holiday. Then he pegged Addie as the main suspect without reservation even though he knew she would never do such a thing. Plus he was letting his new flame lead the investigation which I thought was just crazy.

I have had my issues with Marc’s character in the past so I am glad Addie is forced to put that history behind her and move on with Simon. I only wish Simon was a bit more well drawn so I could fall in love with him. As he is now, he is almost like the ghost of the castle just flitting in and out of scenes with few words or doing interesting things for us to latch onto.

I am kind of disappointed we didn’t get to see Addie and the FBI gal really get to come face to face at the end. I think I needed that bit of closure. We only learn about her actions from Marc’s perspective which really didn’t satisfy me.

Looks like we will have a couple of new characters as we move into book five. I think both the FBI gal and Addie’s cousin will be good foil’s for her to play against.

Even though Marc seems to have moved on romantically, I don’t really buy that for a minute! I feel like he will be waffling big time about his decision to rebuff Addie during this investigation that will have ramifications in future books.

This book really riled me up but I loved it still. Can’t get enough of this series!

I received this as an ARC (Advanced Reader Copy) in return for an honest review. I thank NetGalley, the publisher and the author for allowing me to read this title.
Posted by Toni at 10:59 AM