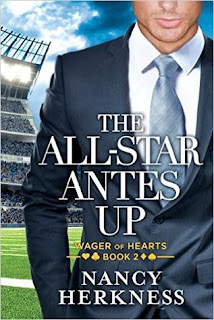 Goodreads synopsis:
“No strings, no rings.” That’s Luke Archer’s motto. As the champion quarterback for the New York Empire—not to mention a self-made billionaire—Luke has given up on serious relationships. Women only want him for one thing: the thrill of being with a superstar. And he likes it that way too. But when his best friend announces he’s retiring from football to spend time with his wife and kids, Luke feels like he’s missing out on something much bigger than his career.

The assistant concierge in Luke’s luxury high-rise, Miranda Tate fled her family’s dairy farm to come to the bright lights of New York City. She works hard to move up and sends her spare earnings home to her brother. When she and Luke meet, there’s an instant sexual attraction which turns steamy quickly, but they’re in completely different leagues. Could Miranda be just the woman Luke needs to win the most important game of his life?

This is the second book in the Wager of Hearts series by Nancy Herkness.

I am totally digging this series. I am finding Herkness to be one of my new favorite go-to authors.

Basic premise: Three men walk into an exclusive bar (a CEO, an Athlete and an Author) for billionaires and make a wager on love when the have given up on the concept. This book features Luke Archer, champion quarterback for the New York Empire. Miranda is an assistant concierge trying to make a name for herself but her boss is doing everything in his power to make her look bad and get her kicked out on her duff since everyone she deals with loves how she does her job making them happy.

This is one of those series you just need to read straight through. Not because you can’t get a handle on the plot but just because you need to know how it is going to wash out for all the man making the bets. I read the book about the CEO last year sometime and the storyline really stuck with me. So it was easy to get back into this world Herkness created.

Be prepared for a long wait as you read this. Nothing happens very quickly. It is like a slow burn that is just so good! Miranda is a bit of a hard head about doing things on her own and making her own way and that kinda contradicts Luke’s need to give her what she really wants even  when she can’t provide for herself. They knock heads a lot just do to each’s unique stubbornness.

If you love a good contemporary romance with a bit of suspense, definitely check this one out. You won’t be disappointed.
Posted by Toni at 8:42 AM