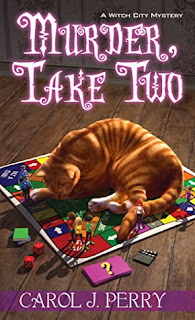 Goodreads synopsis:
When a copycat killer has reporter Lee Barrett brushing up on ancient history, it’s a test where failure could be lethal . . .

As a Salem, Massachusetts, native, WICH-TV field reporter and amateur sleuth Lee Barrett is well versed in the region’s lore. So when the murder of revered local professor Samuel Bond resembles a killing from almost two centuries ago, everyone is on edge. Especially assistant professor Cody McGinnis . . .

Not only did Cody have differences with Bond, he even taught a course on the historic murder. And when his fingerprints and ladder are found at the crime scene, the police are certain of his guilt. Cody’s family, however, believes otherwise and asks Lee for assistance. Now, with the help of her clairvoyant cat, O’Ryan, her tech-savvy librarian aunt and housemate Ibby, and Pete Mondello, her handsome detective beau, Lee will delve deeper than ever into Salem’s past—and into her own psychic gifts—to find the real killer—before someone else is history . . .colony.

This is the tenth book in the Witch City Mystery series by Carol J. Perry.

A copy cat murder takes place in Salem and reporter, Lee Barrett is there to cover all the action.

I really liked the story elements that used the old Parker Brother’s board game Clue to help uncover the killer. They also had the assistance of a tv host who was talented with tarot to led their advice which goes perfectly with the witchy Salem vibe. And Aunt Ibby and the other “Angels” were just a hoot too. Everybody had to get into the act to help solve this mystery.

The best part of this is the rich community vibe and the references to the tv shows and board games from the past. I always love when author’s put that kind of stuff into their stories. Just helps us resonate with the people more easily.

This is a series I want to dig more into. Love its vibe and cast. The mystery was pretty complex too and I always enjoy a good cat and mouse chase for a killer.

I received this as an ARC (Advanced Reader Copy) in return for an honest review. I thank NetGalley, the publisher and the author for allowing me to read this title.
Posted by Toni at 8:14 AM