Our Dried Voices by Greg Hickey 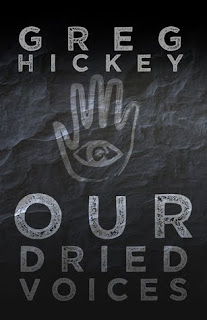 Our Dried Voices
by Greg Hickey

Goodreads synopsis:
In 2153, cancer was cured. In 2189, AIDS. And in 2235, the last members of the human race traveled to a far distant planet called Pearl to begin the next chapter of humanity.

Several hundred years after their arrival, the remainder of humanity lives in a utopian colony in which every want is satisfied automatically, and there is no need for human labor, struggle or thought. But when the machines that regulate the colony begin to malfunction, the colonists are faced with a test for the first time in their existence.

With the lives of the colonists at stake, it is left to a young man named Samuel to repair these breakdowns and save the colony. Aided by his friend Penny, Samuel rises to meet each challenge. But he soon discovers a mysterious group of people behind each of these problems, and he must somehow find and defeat these saboteurs in order to rescue his colony.

This book is different. It starts out a lot like those science fiction stories in the future where the population have no brain but are being sustained by an advanced technology that no one even knows about or even realizes is there. Then the accidents start happening and life starts to be disrupted for the citizens. Suddenly “heroes” emerge from the citizens. They sort of “wake up” from their numb slumber. This story mainly focuses on Samuel and Penny who make it their mission to help their society fix these broken technologies and Samuel discovers that life is way bigger and more complex than he ever imagined.

I though the book was good. Reminded me a lot of Logan’s Run in certain aspects. The story ended on a cliffhanger that I wish had been elaborated on more. I was invested in Samuel and Penny’s story and it sort of ended and then we got a history of the world and how it had come to be like that in the first place. Definitely a book to check out if you like science fiction.