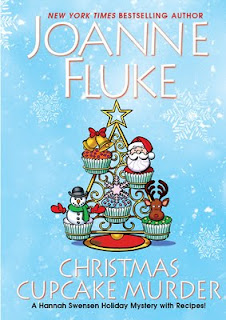 Goodreads synopsis:
As December turns Lake Eden into the North Pole, the heat is on in Hannah Swensen's kitchen to honor two Christmas promises: baking irresistible holiday cupcakes and preventing a person who attempted murder from succeeding the second time around!

While Hannah speeds through a lengthy holiday checklist, drama in town grows like Santa's waistline on Christmas Eve. Her sister Andrea wants to stave off the blues by helping out at The Cookie Jar, Michele's love life is becoming complicated, Lisa needs Hannah's advice, and Delores has a Christmas secret she's not willing to share. But nothing dampens the holiday mood more than the chilling mystery surrounding the man found near death in an abandoned storefront two doors down from Hannah's bakery . . .

The befuddled John Doe can't recall a thing about himself--except for his unusual knowledge of restoring antique furniture. With a smattering of clues and barely enough time to frost Christmas cookies, Hannah must solve a deadly puzzle that could leave her dashing through the snow for her life!

This is the twenty-sixth book in the Hannah Swensen mystery series by Joanne Fluke.

I am a bit confused by the title of this. There isn’t really a murder here. At best there is an attempted murder. This story is mostly about a homeless man that Hannah helps and then later they find him near death at a rental location for Delores and Carrie’s new antique furniture venture.

I loved how they followed all the clues to try and uncover who this man was and get him back to his family. He had a traumatic brain injury which was causing amnesia so he couldn’t help them with many details of his life. Here and there a nugget or two would come out and give them a bit of clarity.

Near the beginning of the book there are some cute scenes where Hannah flashes back to times when her dad was still alive. That was so sweet and it was very nice to see who her father was and what he was like. I hope Fluke does more of that in the future.

Overall it is a great book. This series never disappoints. Love the cast and the mystery always keeps me engaged. A real winner of a story.

I received this as an ARC (Advanced Reader Copy) in return for an honest review. I thank NetGalley, the publisher and the author for allowing me to read this title.
Posted by Toni at 7:14 AM