Dough or Die (A Bread Shop Mystery #5) by Winnie Archer 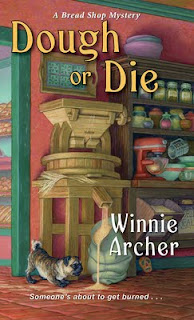 Dough or Die
(A Bread Shop Mystery #5)
by Winnie Archer

Goodreads synopsis:
Known for its mouthwatering traditional breads, the Yeast of Eden bakery has gained fame across Northern California's coast. Now the shop is bound for Reality TV--but a murder may kill its reputation . . .

People come to the beach town of Santa Sofia as much for the healing properties of Yeast of Eden's breads as for a vacation getaway. And now a cable food channel has selected the bakery as a featured culinary delight for a new show. Baking apprentice Ivy Culpepper is excited as the crew arrives, ready to capture all the ins and outs of the renowned bread shop. But instead they capture something much harder to stomach: the attempted murdered of the show's cameraman just outside Yeast of Eden . . .

With no motive and no clues, and the town craving answers, it will be up to Ivy to sift through the evidence to find the truth. But she'll have to move quickly before someone else is targeted or the wrong person gets the heat--and the business collapses like a deflated soufflé, right before her eyes.

This is the fifth book in the A Bread Shop mystery series by Winnie Archer.

Ivy Culpepper is finally finding her niche inside the Yeast of Eden bakery and then a tv crew comes in to film calling it one of America’s Best Bakeries. Then one of the tv crew gets run down in the road putting him into the hospital. Ivy goes into sleuth mode to figure out what is going on. Then tv personality, Sandra Mays is found dead in the tv cameraman’s favorite place to think.

The mystery in this was pretty complex and Ivy had to dig deep to connect everything. I liked how so many of the suspects did have a connection to the area making them even more of a suspect. I also loved the whole concept of the Yeast of Eden bakery and how the bread could heal people’s emotions since it was baked with love.

Definitely a great series to dig into! Going to put this on my must read list in the future.

I received this as an ARC (Advanced Reader Copy) in return for an honest review. I thank NetGalley, the publisher and the author for allowing me to read this title.
Posted by Toni at 9:24 AM