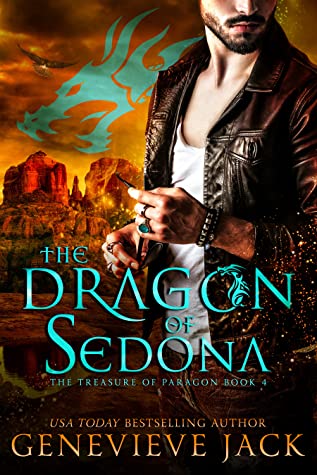 The Dragon of Sedona

(The Treasure of Paragon #4)

Darkness he can't forget. Light he’s afraid to remember. Magic that could change everything.

Exiled dragon prince Alexander never recovered from the murder of his mate Maiara, an indigenous healer he met over three centuries ago. Every waking breath is a painful reminder of what he lost, his grief compounded by the constant presence of her immortal red-tailed hawk, bound to him since her death.

When three of his siblings arrive with news that he may be in grave danger, he secretly welcomes the possibility of a violent end to his torment. But as the four reminisce about how they came to know Maiara in the New World, they begin to see her life and death from a new perspective.

For the first time, the source of Maiara’s power is revealed and inspires a new but precarious hope. There may be a way for Alexander to be with her again, but his second chance for a happily ever after is risky at best, and at worst, could cost him the only thing he has left.

This is the fourth book in the Treasure of Paragon series by Genevieve Jack.

I really love this series.  I was hooked after I read book one “The Dragon of New Orleans.” Lots of great backstory in that one.

This book features yet another sibling from Paragon, Alexander. He is depressed after losing his love many years earlier. There are a lot of flashbacks and it can get confusing at times but I think you can figure out what is going on.

I like how the characters from previous books come up in each new title. It is nice and refreshing to see people you have read about previously pop up and have an impact on the story.

Definitely looking forward to the next book in the series.