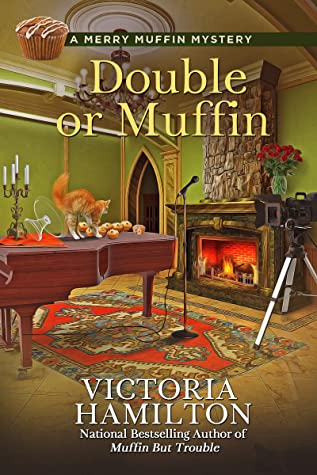 Published February 23rd 2021 by Beyond the Page

In the new Merry Muffin Mystery, baker Merry Wynter must solve a disturbing crime among opera singers before the culprit decides it’s curtains for her . . .

When a reality TV show for aspiring opera singers descends on Wynter Castle, Merry’s got her hands full catering to the endless demands of the distinguished judges and ambitious contestants. Then mysterious rumors about the cast and crew begin to surface, suggesting that some of their performances may be filled with false notes. When a dogged reporter with an eye for scandal who’s been covering the competition is attacked and left for dead, Merry’s determined to discover who orchestrated the heinous deed.

Her long list of suspects is filled with eccentric personalities, including a promiscuous tenor known for making unwanted overtures, a pampered young prodigy and her meddlesome mother, and a quiet up-and-comer whose shadowy uncle may have ties to the underworld. As the musical contest and Merry’s investigation near their finale, she’ll have to act fast to keep a conniving contestant from plotting out her final act . . .

This is the seventh book in the Merry Muffin series by Victoria Hamilton.

Drama returns to Wynter Castle when Merry Wynter’s partner decides to help judges and contestants in a reality tv show Opera singing contest and allow them to stay at the castled on short notice after being kicked out of their last accommodations. You knew from the beginning all this was going to be a problem.

I enjoyed the mystery and following the characters around but I wasn’t a big fan of the reality tv show part. Drama like that never appeals to me. But it was well-written and just a personal preference on my part. The story is more than stellar. The cast was fully crafted and detailed. Each and every person had quite a bit of backstory which usually isn’t the case for minor characters. Loved so much about it. Definitely check out this series, I know I want to go back and read quite a few books I have missed. I see a marathon in my future.