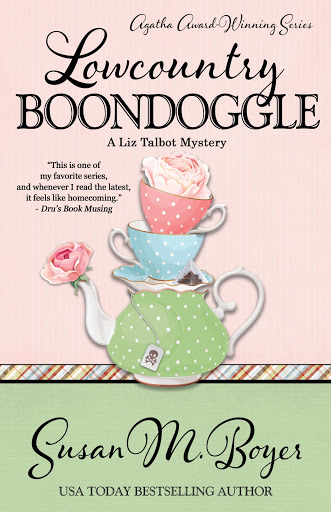 A shocking number of people had reasons to want the genteel, bowtie wearing, tea-drinking professor dead. Was it one of his many girlfriends or a disgruntled student? Or perhaps Murray was killed because his failure to invest meant the hemp farm trio’s dreams were going up in smoke?

Though Liz’s long-dead best friend, Colleen, warns her the stakes are far higher than Liz imagines, she is hellbent on finding the no-good killer among the bevy of suspects. But will the price of justice be more than Liz can bear?

This is the ninth book in the Liz Talbot mystery series by Susan Boyer.

I think this series has advanced so much that just calling it a Liz Talbot mystery doesn’t really do it justice. I really think Lowcountry Mystery might be a better moniker.

Maybe this is just me but this almost felt like a series finale. Lots of stuff happens at the end that I wonder if the author had thought to end the series right here. I know that isn’t true since there is a book that came out around Christmas in this series. But this would have made an awesome finale, if that had been its original intention.

You can’t go wrong when you have Nate and Liz on the case. Liz thinks back to Colleen’s prediction about Nate having a horrible accident that is caused because he is trying to keep her safe. Liz laments about this a lot in the book.

The mystery was quite clever and really kept me guessing. There were definitely enough suspects to keep this whodunit interesting. And you have got to love the resident ghost but there wasn’t enough of her in this title to suit my taste.

I wish the community were a bit more on stage. I feel like we are doing these stories in a bit of a vacuum. That sense of community is missing here, in my opinion. Would love to see more of that.

Overall great story and a series worth following!

I received this as an ARC (Advanced Reader Copy) in return for an honest review. I thank Edelweiss+Plus, the publisher and the author for allowing me to read this title.