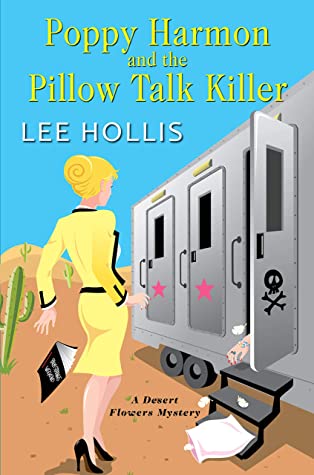 The Golden Girls meets Remington Steel in Lee Hollis' third mystery set at a Palm Springs retirement community! Retiree-turned-PI Poppy Harmon likes the anonymity of working behind the scenes for the hottest names in Palm Springs. But when solving a case demands dragging her old acting career out of retirement, it's lights...camera...murder!

Cast in her first role since the 1980s, Poppy has never been more rattled or unprepared on a film set. It's an embarrassing but necessary cover to keep an eye on client Danika Delgado, a rising starlet and social media influencer with a large following--including a dangerous stalker who won't disappear. The leading lady's fame is growing, and so are the threats against her life...

Unfortunately for Poppy, there's more to fear than flubbed lines. When she finds Danika smothered to death in her trailer at Joshua Tree National Park, the horrifying crime stirs up memories of a man known as the Pillow Talk Killer during her time as a young actress, bringing unsolved murders from the past back into focus...

A trail of clues urges Poppy, hunky sidekick Matt Flowers, and the rest of the Desert Flowers Detective Agency gang on a frantic chase after Danika's crazed #1 fan. But as co-stars and production crew members start looking equally suspicious, Poppy must expose a slew of insidious industry secrets before a murderer rolls out the red carpet for someone else...

This is the third book in the Desert Flowers mystery series by Lee Hollis.

Here we are in book three and it is just as exciting and fun as the last book. I enjoy all the 80’s references to tv shows and actors of that time. I keep seeing Poppy as a cross between Della Street and one of Charlie’s Angels.

This episode we are introduced to an influencer who is staring in a movie and the director becomes so fascinated with Poppy that he casts her in a role. Later, Matt finds himself as the leading man.

This book is light-hearted and fun. I look forward to each new book that comes out. The mystery is hard to figure out and keeps you guessing. And the characters all jump off the pages like you are reading about real people in the entertainment pages.

I highly recommend this series so much.