Public Trust (The City of Dreams: Book 1) by Tess Shepherd 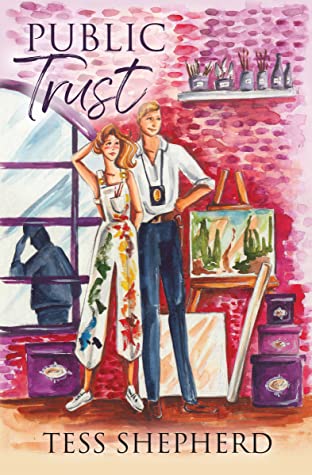 When Lola Michaels wakes up to a strange man in her apartment, his hands touching her throat, she’s petrified. And, although one scream sends her nighttime visitor running, she can’t shake the feeling that next time she might not be so lucky.

LAPD Lieutenant Jacob Simmone isn’t entirely sure what to make of the situation either. Lola is a gorgeous, single woman, living in an eight-hundred-square foot artist’s studio. Why would a man break in while she was home? Why would he leave without taking a single item? It’s only when the bodies of similar female victims start surfacing in the same neighborhood, that he realizes there may be something more to Lola’s midnight encounter. And, as Jacob and Lola are thrown into a situation that neither of them could have expected,—or wanted—Jacob can’t help but wonder if he’s making a mistake, if he’d be more effective at tracking a killer without Lola always nearby, clouding his brain. Little does he realize that, maybe, he can’t catch a break because someone else, someone with real power, is holding all the cards…

This is the first book in the City of Dreams series by Tess Shepherd.

I thought this was a great romance with touches of mystery. I was fascinated by the budding relationship between Lola and Lieutenant Jacob Simmone. She is just another victim in a case of a serial killer. But they were so attracted to each other that they couldn’t help but fall in love. All the people around them were all rooting for them. In real life, this wouldn’t be the case since it is not right for a police officer to date the victim until the case is solved. That is the one thing that bothered me about this story. I don’t think Jacob would have bent the rules like that seeing what a decent guy he was.

Overall great romance story. I look forward to other books in this series. I would definitely love to see Lola and Jacob in another story.

If you like romance with a dash of mystery, definitely check this one out. You won’t be disappointed.