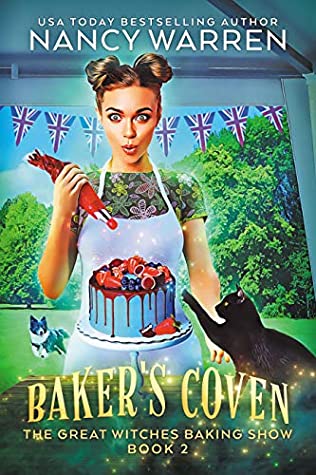 Can she bake a winning cake without getting iced?

Competition is hotter than the pre-heated ovens as The Great British Baking Competition moves into cake week. Amateur baker Poppy Wilkinson has a lot to deal with, from learning she has talents she never knew about, to trying to keep cool and bake under pressure.

She’s also trying to track down the secrets of her parentage. Meanwhile, she’s saved from death by a local Border collie who seems to think she’s part of his flock and herds her out of danger. Was it an accident or does someone want her out of the baking competition permanently?

With witches, an energy vortex, an ancient manor house that holds it’s secrets tight, Poppy’s barely got time to practice her fondant icing, never mind escape from a killer.

This is the second book in the Great Witches Baking Show by Nancy Warren.

Poppy is back and still in the running in the Great British Baking Competition. Gerry, the ghost from the first book is back and causing all kinds of havoc. Poppy gets more involved with some of the townspeople and when she visits a nearby farm nearly gets killed while picking gooseberries for one of her competition entries.

I enjoyed getting to know more of who is in the coven and who some of the townspeople are. There is even a cute dog named Sly that is just a scene stealer extraordinary.

Loved so much about it. If you like a magical cozy mystery, definitely check this one out. You won’t be disappointed.