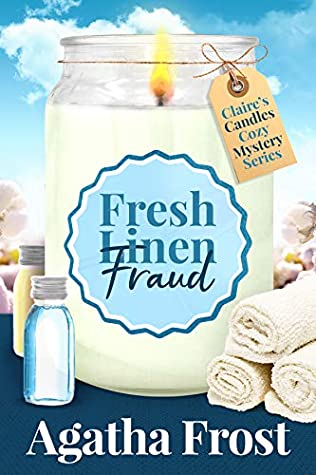 You can’t choose your family. Because if Claire Harris had a choice, her maternal grandmother – not-so-affectionately known as Mean Moreen – certainly wouldn’t have made the cut. Nor would she have received an invitation to the party celebrating Claire’s mum Janet’s forty years of service at the Northash Post Office.

However, after a disturbing conversation with her boss, Eryk Kowalski, Janet calls off the party at the last minute, leaving Claire (and half the village) wondering what’s happened. When Eryk is killed in a supposedly random burglary the next morning, gossiping tongues begin to wag all over town.

As Claire hunts for the truth that will absolve her mother of any wrongdoing, she discovers that while her family might have its moments – and its Mean Moreens – they’re positively angelic compared to some of Northash’s other residents.

This is the fifth book in the Claire’s Candles series by Agatha Frost.

This book really centers around Claire’s mother, Janet. Janet acts really mysterious at the beginning of the book and considering her husband used to be a detective inspector, I am not sure why she didn’t consult him about her predicament. There are lots of threads put together concerning Janet’s backstory with her own mother, Moreen, who makes an unwanted visit to their home and makes a nuisance of herself the entire time she is there. I know there are people like that in real life but jeez. No wonder Janet is the way she is. I liked getting a better perspective of Janet and seeing some real humanity in her.

The story centers a lot around the post office where Janet works and subsequently gets fired from during the course of the book. Her boss, Eryk is killed and later his son is found dead too further complicating the mystery.

Overall it is one great read. Check it out.

"I received a complimentary copy of this book via BookSprout. Opinions expressed in this review are completely my own. Thank you to the author, publisher and BookSprout for the review copy.“