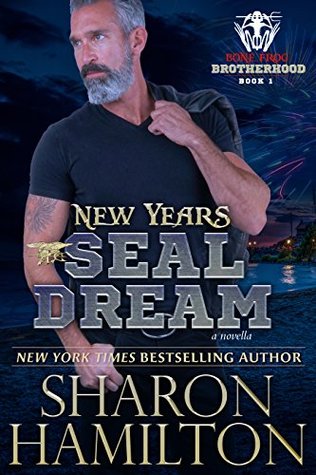 Tucker Hudson has been off SEAL Team 3 for nearly ten years. He reluctantly attends his former Teammate’s wedding on New Years Eve, vowing to keep his hands to himself and his mouth shut. Suffering nightmares from a tragic deployment, he barely left the Teams with an honorable discharge. Romance is one complication he does not need. And no one needs him either: not the Teams, not his family.

Brandy Cook knows she isn’t as attractive as the skinny blondes who usually attend SEAL weddings. Although she’s dieted for three months straight, she’s only managed to fit into a size 16 dress, and only then with the help of a monstrous undergarment that nearly prevents her from breathing. So when the big grey-haired former SEAL with a body built like Shrek takes a passing interest in her, she figures he’s been forced by a wager or some kind of trick.

But as the clock strikes midnight, the improbable happens and suppressed passions take over, ending in a steamy night neither will forget, but both will admit later was a huge mistake. When Brandy finds herself in trouble, Tucker turns out to be the only one who can keep her safe from the fury building around her world.

This is the first book in the Bone Frog Brotherhood by Sharon Hamilton.

This wasn’t exactly insta-love but it was insta-in-the-sack. I couldn’t quite connect with the characters until the scene where the grocery store owned by Brandy’s father is burglarized and he is quite gravely injured. Then the story really took off, in my opinion.

I know books like these are just finding interesting ways to hook up two unlikely people but I think this book could have been expanded at least double its length. I thought the subject matter could have handled more pages. I was left with wanting more. I think this Bone Frog series could have been done as a bind-up very successfully. As I look to see what the next book in the series is about, I see it still features these two characters. I would have liked to see other guys from Tucker’s unit have their own stories under the Bone Frog label.

Not sure if I will go on to book two but I will keep the idea at the back of my mind. I just felt like the story ended before it was complete.