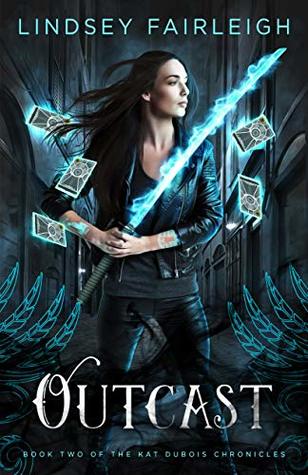 War has broken out among the immortals. It’s time to choose a side.

Kat Dubois never asked to be the emissary for the good guys. Diplomacy isn’t her strong suit, and patience isn’t one of her personal virtues. But when a millennia-old god asks you to do a job to further the war cause, you do that job…especially when you’re the opposition’s most wanted.

Kat’s mission is complicated when a mysterious disease crops up among Seattle’s homeless population. It’s up to her to find a cure while the infection is contained, and to do that, she must go straight to the source—Ouroboros. It’s been a week since Kat promised to come after the twisted corporation; the time has come for her to fulfill that promise.

This is the second book in the Kat Dubois Chronicles series by Lindsey Fairleigh.

This story has a bit of a prophetic aspect to it. It concerns a virus called CV Cascade Virus that was put out into society to kill off humans. It was a pandemic and it kind of reflects what happened last year. They were experimenting in the story seeing if they could make humans immortal like Kat and her clan.

Kat finds herself running to Garth for assistance and the two find a real closeness here. Then when she draws a doorway to where the kids are on his wall, she ends up pushing him through in order to save him from assassins who were after her and this exposes him to the virus. Now they have a choice. Do they make Garth Immortal to save his life?

This is a compelling story that just gets more interesting as it goes along. It is becoming a must read series for me. . I think I am definitely hooked on the Ink Witch.

Loved so much about it. If you like a paranormal mystery, definitely check this one out. You won’t be disappointed.