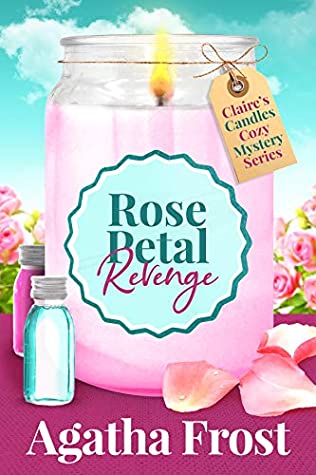 All Claire’s best friend Damon wants for his birthday is to celebrate with his far-flung friends. At a convention for science-fiction fans. With cosplay. But when Damon’s once close-knit group of online friends splinters in the week before the event, threatening to ruin Damon's birthday and the plans he's been looking forward to for months, it's Captain Claire to the rescue – or it will be, just as soon as her mother puts the finishing touches on her costume.

Of course, what Claire doesn't know (aside from pretty much anything to do with sci-fi) is that amid the hubbub of meet-and-greets, merchandise, and video game tournaments, it's all fun and games . . . until someone gets stabbed.

Thrown headfirst into a murderous friend group filled with lies and deception, can Claire solve the case before the bodies pile up?

This is the fourth book in the Claire’s Candles series by Agatha Frost.

In this book Damon asks his friends to come down and go to a sci-fi convention to play their favorite D&D-like game but it is now online. Claire finds an old boxed version of the game never opened which thrills Damon. Claire’s mom really gets into it making her a cosplay costume even though she complains the entire time. Then one of Damon’s friends ends up dead and they begin to wonder if he really knows his online friends as well as he thought he did.

This was an intricate plot that draws you into the action and make you want to know whodunit. It’s a hard one to figure out since the tale is wove so tightly. DI Ramsbottom is still his normal “I don’t have a clue” self in this one but others have begun to notice his ineptness. Claire is continually saving his butt time after time and by now he is just expecting her too which is not nice at all. Maybe he needs to go back to detecting school to learn how to do it.

The mystery here is good and the whole sci-fi convention concept is a great one. It really draws you into the action and makes you want to know what is going on. Loving this series so much. Wish there were more scenes in the candle shop where she is making her wares, though.

Overall it is one great read. Check it out.