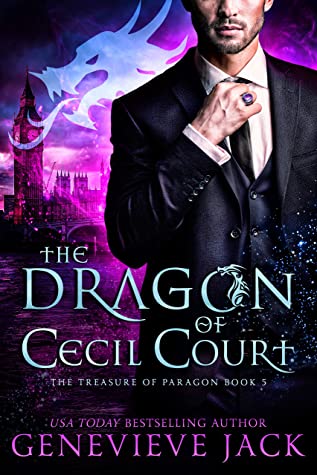 The Dragon of Cecil Court

(The Treasure of Paragon #5)

He’s only ever had one weakness.

Nathaniel Clarke has a secret. Before he became the owner of an occult bookshop on Bookseller’s Row, he was a prince of the kingdom of Paragon. Now the dragon shifter is the high priest of the Order of the Dragon, a society of the most powerful supernatural beings in London. He’s only ever had one weakness, and he hasn’t seen her in a decade.

She’s only ever been good at one thing.

American pop singer Clarissa Black survived by singing on street corners before Nathaniel came into her life and unlocked the latent magic inside her. Despite their passionate affair, she refused Nathaniel’s proposal to pursue her music career. Her multi-platinum albums have made her a star but one with few people she can trust.

It only takes one spark to change two lives forever.

When Clarissa’s voice fails her during a show in London, it’s an excuse to reconnect with the man who remains her deepest regret. Nathaniel is reluctant to open old wounds but can’t refuse Clarissa’s plea for help or the passion her nearness awakens in him. But as he closes in on breaking the curse, Nathaniel learns the cause of what ails her is tangled with the deadly past he left behind.

This is the fifth book in the Treasures of Paragon series by Genevieve Jack.

This is the story where we realize how important the three Tanglewood sisters are to the whole scheme of things. There are three sisters here who don’t know they are sister and their bond is broken by Dragon Queen Eleanor in order to keep the prophecy from coming true about the child of a dragon and a witch brining down the throne in Paragon. I have to admit this evil queen is quite a piece of work. She has made it her mission to ruin her children’s lives. Makes me wonder why she ever had so many if she had such aspirations about taking over control of the realm.

This book features Clarissa, an American pop singer, who has a past with Nathanial but thought her career was more important than love and left him ten years earlier to build her career. Now she is a big success and the evil queen has broken the bond between the sisters which has counteracted their magic and now none of them have magical abilities. This really effects Raven too but she is on a secondary storyline taking place in Paragon. This story does jump around a lot but I discovered that the author made it easy to transition from one setting to another without confusing us in the process.

I love how the characters from the previous books are all in the next book which gives this series a ton of richness as the ultimate story unfolds from book to book.

Overall it is one great read. This series is amazing. Check it out.