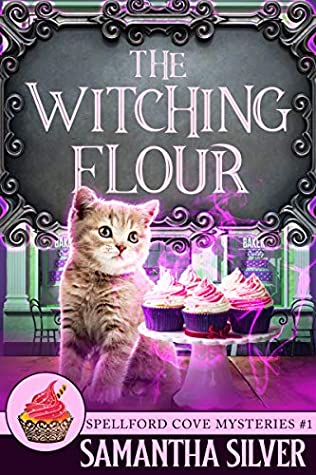 Welcome to Spellford Cove, where the baking is sweet and the witches are wild.

Robin Carter's life is less than stellar. All she has going for her are a minimum-wage job she hates, an uncanny ability to attract the biggest losers on her dating app, and a raccoon sitting in her kitchen sink eating her chips. So, when she finds out she's inherited a bakery in a small Washington town, Robin thinks this might just be the fresh start she desperately needs. Upon her arrival, however, Robin finds out she's inherited more than just a small business: she's also got her mother's magical powers.

However, things start going south for Robin when a man dies at the local diner just after her arrival in town and she's fingered as the prime suspect. With half the town thinking she's a killer, Robin decides to take matters into her own hands. But between a ghost who desperately needs therapy, a snarky familiar who loves to quote literature, and a grandmother who walks to the beat of her own drum, Robin really has her hands full.

Will she be able to navigate this new reality and find the killer, or will she crumble like an overcooked brownie?

This is the first book in the Spellford Cove paranormal cozy mystery series.

This is the first book in the Spellford Cove series by Samantha Silver.

This book grabs you right from the beginning. I was hooked from the second she found the raccoon eating chips in her kitchen after her witchy aunt, whom she didn’t know about, left a letter on her kitchen table.

This is a coming of age story in a way. Robin is learning about not only the fact that she is a witch but that she has cooking powers and her biological mother had left her a bakery if she wanted it. Since Robin had lost her adopted parents three years earlier, family of any kind was something she wanted to check out.

Then when she finally got to Spellford Cove, a man dies right in front of her. Supposedly she is suspect number one even though she didn’t know the man from Adam and had just arrived in town that morning. Oh, and she must have swung by the local Wal-mart to pick up the cyanide which is what poisoned him into oblivion. Right… not!

The building of this universe fascinated me and had me plowing through the book in one evening sitting. Can’t wait to try out book two and see what else unfolds.

If you love a good supernatural cozy culinary mystery, definitely check this one out.