No Fear by Casey Kelleher 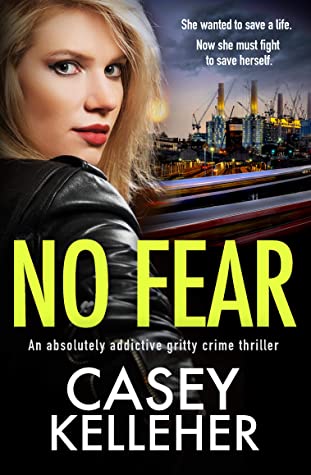 She wanted to save a life. Now she must fight to save herself.

When DC Lucy Murphy meets Debra, wife of feared drug dealer Gerard Jennings, she sees a young woman in desperate need of help. Brutalised by her husband, Debra is too terrified to tell the police what she knows. But Lucy is determined to bring Gerard down – for Debra’s sake, and for the safety of the Griffin Estate.

Meanwhile, after the death of one of his drug runners, Gerard is under pressure from his bosses to prove he’s still up to the job. Facing threats of violence as well as police interest, Gerard is getting desperate – and desperate men are the most dangerous of all.

As Lucy prepares to go undercover in Gerard’s gang to get the evidence she needs to arrest him, her beloved grandmother Winnie starts acting strangely. She mentions a man visiting her at night in her care home, but that makes no sense – does it?

Any distraction could prove deadly for Lucy and the people she’s trying to protect. But she has backed a vicious man into a corner, and he’ll stop at nothing to get what he wants.

A gritty, shocking, action-packed thriller that will have you on the edge of your seat until the very last page. Fans of Martina Cole, Kimberley Chambers and Jessie Keane will love this.

The plot of this book just kind of sneaks up on you.

Lucy and Morgan are concerned about a battered woman not realizing she is the wife of a notorious drug dealer. Then Lucy goes undercover as Debra's friend to gain more Intel but is accidentally outed by Debra's young son. Plus, there is a mile in the police department that is closer than Lucy realizes.

This store is rich in detail and it scares you to death while giving you all the feels. As she tried to solve this mystery, Lucy's relative Winnie is in and out of dementia which is an added challenge in her life.

Read this book for free via my Kindle Unlimited subscription.