A Score to Kettle (Pebble Cove Teahouse #3) by Eryn Scott 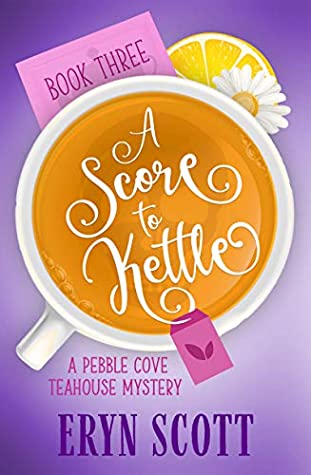 A Score to Kettle

A ghost mystery for readers who don't usually enjoy the paranormal."

The residents of Pebble Cove were wary of the new commune at The Pines even before someone ended up dead.

Rosemary is excited to cater her first even at the newly opened commune's full moon festival. When a young woman is found murdered in her yurt, it's clear these rich wannabe hippies aren't as peaceful as they pretend.

As the investigation unfolds, Rosemary realizes these commune members have more secrets than they do trust funds. She can't help but feel Chief Clemenson is, again, one step behind.

In addition to working the case, being at The Pines provides the perfect opportunity to investigate Asher's death. Solving any mystery is difficult; solving one over a century old seems almost impossible. But just as Rosemary starts to make headway in both cases, a violent storm rolls in from the sea. Will the wind and rain wash away any hope of finding the murderer?

Readers, this is the third book in a new cozy mystery series by Eryn Scott. These books are all clean with no gore and no swearing. Starting from the beginning with this series will provide the best reading experience. The ghosts are the only paranormal aspect in the series. And there are definitely cats because ... well, there has to be. :)

This is the third book in the Pebble Cove Teahouse series by Eryn Scott.

I like how Rosie is settling in her new town and how the mystery is very interesting to follow. But I am kind of wondering where the relationship between Asher and Rosie is really going. I almost feel like we are being led down a path where there can be no resolution. I almost wish a man was placed in the picture that Rosie could focus her romantic intentions on instead. This whole ghost/human relationship dynamic doesn’t work in a romantic setting which is where I feel this is going. I like them as a crime fighting duo during the search for clues but when the “feelings” start edging in, I get uncomfortable.

Don’t get me wrong, I love this series and want to continue with it but I just question the ultimate direction I see this going in the future.