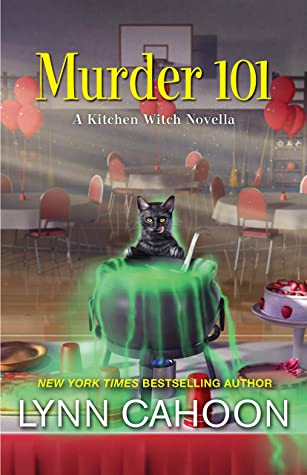 Mia Malone has opened a catering business in Magic Springs, Idaho, putting both her culinary expertise and her gift for spellcasting to good use. But it’ll take more than witchcraft to make a murderer disappear behind bars…

Mia Malone has landed a lucrative and convenient gig, catering a reunion at the old school that’s become her new business headquarters. The town swirls with rumors that St. Catherine’s Preparatory is haunted, but there’s one living visitor that Mia wasn’t expecting—her mother. Theresa Malone stepped away from the magic that runs in Mia’s family, much to the annoyance of Mia’s grandmother. Soon Mia has to deal with more than personal drama when Robin Hanover, the head of the reunion committee, is murdered in one of the classrooms.

Robin had a history as a mean girl. Could one of her old enemies have been nursing a grudge all this time? Or is the culprit even closer to home? Mia will need the help of her magic, her wits, and her family to figure out the truth—before she gets schooled by a clever killer…

This is novella 1.5 in the Kitchen Witch series by Lynn Cahoon

Mia is using an old school for her new catering business. Apparently, there was a non-official witch group at the school back in the day. And they are having a reunion at this school and some members keep trying to sneak upstairs to do some sort of ritual. And of course, much to Mia’s dismay, someone ends up dead on her doorstep (or in her new catering business’s building). This story revolves around a mean girl and the possibility that an old enemy might have done her in.

Pretty interesting story but I wish this had been longer. I am sure there was enough meat in this storyline to make it a full fledged novel. I just felt like it was over before I could wrap my head around what was going on. Definitely interested in continuing on with the Kitchen witch series. Totally invested already. I mean it is Lynn Cahoon, so I will be there no matter what. Love that gal’s writing.

Read this book for free via my Kindle Unlimited subscription.