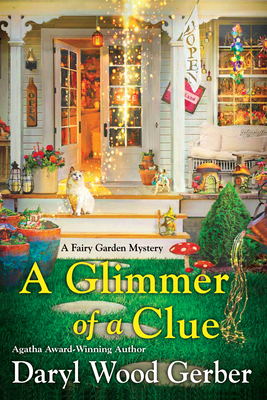 A Glimmer of a Clue

From Agatha Award-winning author Daryl Wood Gerber, the second in an enchantingly whimsical series featuring Courtney Kelly, the owner of a fairy-gardening and tea shop in Carmel, California. It's a special place brimming with good vibes, lush greenery, miniature fairy accessories, and soothing fountains; the perfect venue for book club teas and home to a cat named Pixie. But in Carmel-by-the-Sea, things aren't all sweetness and fairy lights...

When Courtney's friend Wanda gets into a ponytail-pulling wrestling match in public with a nasty local art critic, Courtney stops the fight with the help of a garden hose. But Lana Lamar has a talent for escalating things and creating tension, which she succeeds in doing by threatening a lawsuit, getting into yet another scuffle--in the midst of an elegant fundraiser, no less--and lobbing insults around like pickleballs.

Next thing Courtney knows, Lana is on the floor, stabbed with a decorative letter opener from one of Courtney's fairy gardens, and Wanda is standing by asking What have I done? But the answer may not be as obvious as it seems, since Wanda is prone to sleepwalking and appears to be in a daze. Could she have risen from her nap and committed murder while unconscious? Or is the guilty party someone else Lana's ticked off, like her long-suffering husband? To find out, Courtney will have to dig up some dirt...

This is the sixth book in the Fairy Garden Mystery series by Daryl Wood Gerber.

This is a fun frolic into the fantasy realm of fairies. Courtney had a fairy friend and there are quite a handful of other fairies in this book too which kinda took the gruesome edge off the idea of murder making it much easier to swallow. Lana Lamar is a pretty decent pickleball player and wanted to bypass the rules when she couldn’t meet the minimum requirement of times playing during the season. She pretty much gets on the bad side of everyone so when she ends up dead, no one is really surprised.

Courtney searches for the killer with her fairy friend, Fiona, who assists with sprinkles of fairy dust and enchantments which is totally fun to read about. The mystery is an easy one to follow along with interspersed with classes that Courtney teaches about making fairy doors. Sounds like a fun thing to do in an afternoon and the gifts seem to brighten people’s day’s too.

Loving the whole concept of this series and just can’t wait to see what the author pulls out of her hat next. Such a fun and magical ride in mystery-land.

Great series to follow. Definitely going to dig into it more! So much fun to read!

If you love a cozy mystery, definitely check this one out. Great new must read book great series too!