BOOK REVIEW: Read It and Weep by Jenn McKinlay 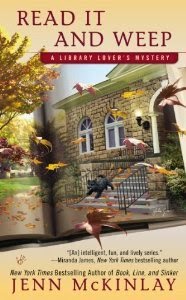 Read It And Weep (Library Lover's Mystery)
by Jenn McKinlay

William Shakespeare is credited with inventing how many words?*Answering Shakespeare trivia comes with the job description for library director Lindsey Norris. But when the Briar Creek Community Theater mounts their newest production of the Bard, she has no intention of leaving the stacks for the stage. Unfortunately a villain is waiting in the wings…Former Broadway actress Violet La Rue is holding auditions for A Midsummer Night’s Dream—and everyone from the sour spinster librarian Ms. Cole to Lindsey’s youthful library pages are trying out for parts. Brought in to play the mischievous Puck is the flirtatious professional actor Robbie Vine, who seems to have eyes for Lindsey. Before her blush has faded, the Bard’s dream turns into a nightmare—when one of the cast is poisoned. Now Lindsey and her crafternooners must take center stage to unmask the culprit before the final curtain call…

I have to admit I had a hard time getting into this book. It was probably just me and my inexperience with the series. But don't give up on this book if you experience the same thing. The whole atmosphere is just so darn appealing.

The first half of the book until the murder was slow and the characters were not what I wanted them to be. But that's okay. This book was still pretty good, decent. My main concern was that I wasn't as familiar with the characters as I should have been since this was the first book I had read in the series.  The latter half of the book really picks up. Yay!! Sully finally started fleshing out a bit for me which was a relief. I want to root for a couple when I get invested in a book. I found the flow of the text a whole lot better at the last half. In the end, I did enjoy the plot and I did figure out whodunit which always makes me happy.
Posted by Toni at 10:39 AM