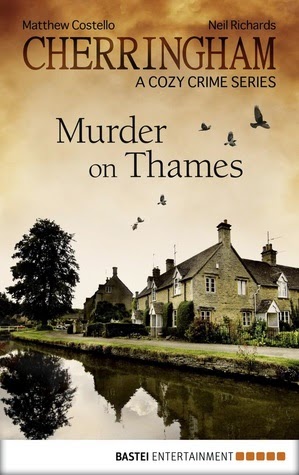 Cherringham: Murder on Thames is set in a quiet and peaceful town called Cotswolds. Sarah Edward, a freelance web designer with two kids learns that her best friend from high school, Sammi Jackson, has been found dead in the river. It takes former NYPD homicide detective Jack Brennan to do his own investigation into Sammi's death with a little prodding from Sarah in order for the case to be solved.

This was a wonderful ride. It is set in Britian and Jack is the "Yank" as they refer to him often in the book. I really enjoyed Jack as his interest in the case sort of "woke him up" to life again. This is the first book in a series of "episodes." The Goodreads website says: "Cherringham - A Cozy Crime Series" is a series of twelve self-contained episodes. A new case for Jack and Sarah is released each month." This is just a starting off point for the series so I suspect that everything will get more exciting from here now that the characters and setting have been introduced to us. I'm excited for more.

I can truly see this series on television (co-author Neil Richard works for the BBC so it is no wonder) it reminds me of Midsomer Murders. It is a lazy cozy mystery that really entertains. I look forward to reading more in the series. I have already bought book 2: Mystery at the Manor.

I received this book gratis from the publisher via Net Galley in return for an honest review.
Posted by Toni at 1:31 PM