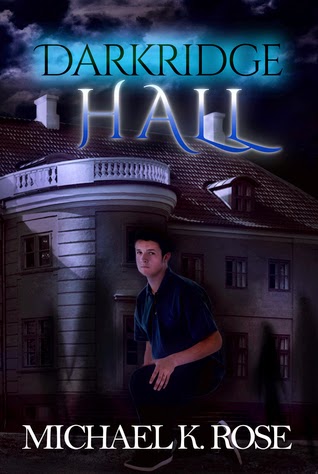 Darkridge Hall is an Egyptian designed dorm for some of the students at Kransten Academy. Andy is one of those students. And Mark Harris, is the adult dorm supervisor and teacher at the Academy. Shadow people are killing residents of the small town of Bethlehem and when the number gets to 17 something horrific is supposed to happen. This book is labeled "horror" but I think I would call it a "thriller." It's target audience, to me, would be from middle grade to YA, probably leaning toward middle grade. I really liked the complex thought it took to make up the design of the building and how it played into the entire mystery of the piece. I kept thinking Aleister Crowley when reading this. He was all about magic sort of like Adrian Darkridge was.

This book was a bit male dominated. I think the only female in the piece was Sally, wife of one of the murdered people who turned into the "shadow people" who were tormenting Andy and Mr. Harris. I would have liked to have seen more of the student body of Kransten Academy. But since they only featured Andy and Dave, I think this author could make this into a series sort of like House of Anubis on Nickelodeon.

I enjoyed the mystery but thought the book could have been longer and more complex but since it is middle grade-YA, I will give the author a break on that point. Really enjoyable read. Thank you.

I received this book as an ARC (Advanced Reader Copy) from Net Galley in return for an honest review.
Posted by Toni at 7:39 AM