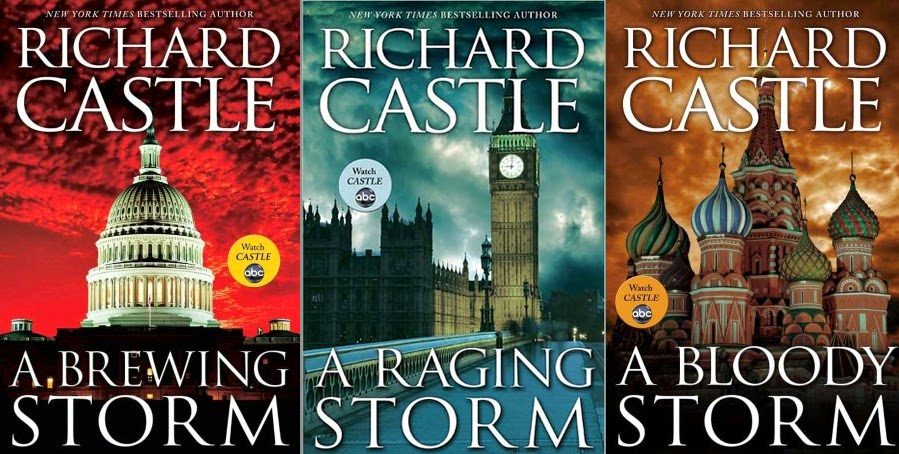 This series is based on characters that novelist Richard Castle, from the ABC TV show, Castle, has written. Richard Castle's first novel success was with the character Derrick Storm, and this is who this trilogy centers on.

This book stars off with an "I knew you weren't dead" moment when Derrick Storm is revealed to be quite alive and off fishing in Montana (or maybe it was Wyoming) just living a normal life. He had to fake his death due to a messy op in Tangiers. His old boss, Jedidiah Jones, calls in a huge favor to help solve a high-profile kidnapping. But you know there has to be more to the story if the CIA is pulling Storm out of retirement in order to be involved in the case.

This was a pretty good beginning. I had started it back when it came out in 2012 but only read to about 85% before abandoning it. At that time book three had not been released yet and I didn't realize that all three books made up one huge story.

Book 2 was the most boring part for me. It was basically just setting up the action that would happen later in book 2 and mostly in book three. But it was entertaining.

This section was the most entertaining of the three but I did think the action was wrapped up pretty easily. It is a complex plot for such a small book series. This 3 book combo makes me look forward to the other books in the Derrick Storm series that are already out (Storm Front and Wild Storm).

I enjoyed all three books. I have seen them available on Kindle at Amazon.com and through my iBooks App in the iTunes store.

This was a quick read and it is sure to make many Castle fans really happy to see Derrick Storm is definitely out of retirement. Thanks ABC and Richard Castle!
Posted by Toni at 10:13 AM