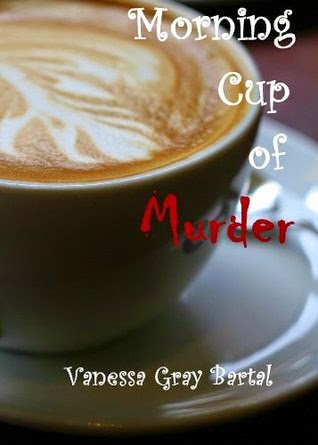 Lacy Steele returns to her hometown after a bad breakup with her ex who strangely enough gets together with her sister, Riley. Things don't get better in Mudville when Lacy's grandmother is arrested for murder! Lacy can't understand why the detective of the police force is trying so hard to implicate a little old lady for such a murder. Lacy decides that it is up to her to solve the mystery along with her classmate (He was the school jock and most popular guy in school.) and cop, Jason and new pastor to her grandmother's church, Tosh.

I think this book is mis-named. I mean, she does go to her favorite local coffee shop for coffee every morning because she doesn't know how to make it on her own. And I see why they named it that, but I don't want to give away anything. But I just kept thinking it should be called the Banana Cream Pie Murder. The murder weapon was the knife they had used to cut up the banana cream pie that Lacy's poor dastardly Grandmother had brought the deceased before she was... deceased. (Lacy's grandmother is not dastardly)

The big twist at the end took me totally by surprise. I wasn't expecting that sort of twist at all. Good on you, Vanessa! When I bought this book a few years ago, I think it was the cover that kept me from reading it. It just looks dang cheesy. But the text is not cheesy at all. This is a well-written and interesting story.  The murder story was complex and the characters are  all individual and well drawn out. No cardboard people in this book. I was captivated by Lacy and all her exploits. This is definitely one you want to check out. I mean, it's only 99 cents in the Kindle store and worth every penny. So, how can you lose? This book takes the axiom "don't judge a book by its cover" to a whole new level.
Posted by Toni at 7:23 AM