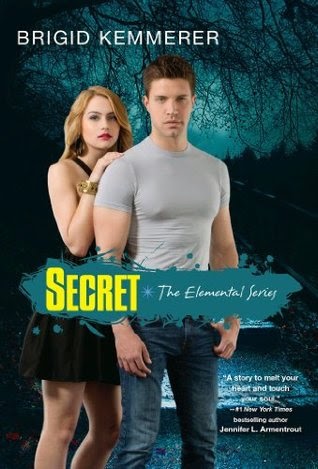 Nick Merrick is a kid in high school. And high school is hard enough without have super elemental powers. He has the power of Air. And people called "Guides" are after him and his family because they have full access to certain elemental powers. It makes them dangerous and they want to eliminate them.

There was a lot going on in this book. So much so, that I have a hard time figuring out where to start. Firstly, the author did a great job of getting us up to speed on events that had happened before this book started. This book is labeled Elemental #4 but I believe there are more than 3 books prior to this one. That means, lots of back story to catch up on.

This big secret the title alludes to is two-fold. It speaks of Nick's secret of being gay and how he deals with it. And his friend, Quinn, and how she deals with her family life. They both are keeping secrets from everyone and these secrets impact many in the cast.

I really enjoyed this story. Gay storylines weren't really available when I was this age. I am glad there are books like this out there now so that people can see that everyone is just like everyone else at the heart level. They are real people dealing with real problems. Although, they had problems that dealt with their elemental powers, the biggest problems they uncovered in the book dealt with real issues in real life. I love that.

Quinn's story was all about alcoholism and drug abuse and how it affected her life. It colored her choices and ultimate made her think she was not as good as others around her. She thought she had to do something to earn friendship or love.

I love how the author gave us a glimpse into these teens lives. This book could be life changing for teens in similar situations. The author even has a shout out at the end of the story showing where teens can get more advice about the subjects discussed in the book.

I received this as an ARC (Advanced Reader Copy) from Net Galley in return for an honest review.
Posted by Toni at 7:34 AM