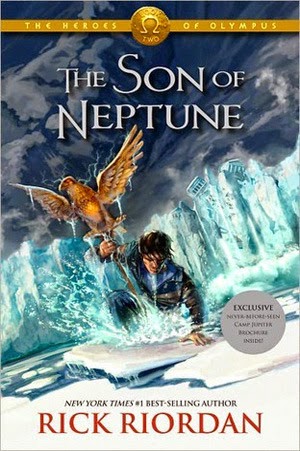 I love the first Percy Jackson series. I accidently read book 4 of that series before book 1 and so I always get confused by the chronology of some events. I have a great affinity for the Greek Gods. So, this book series which focuses on the Roman Gods is really going to get me more knowledgeable about them. I read the first book in this Heroes of Olympus series back when it first came out so, I was a bit baffled as to why Percy had no memory. But I quickly caught up to speed. At first I wondered why Grover and Annabeth weren't in this series physically but I soon realized that would just overwhelm the text too much.

This book, even though it is over 500 pages, it reads really quickly. Rick Riordan really has a gift of prose. I just love this stuff. It's like eating candy or potato chips. You just can't get enough sometimes. I'm already starting to read book 3, The Mark of Athena. Athena is my favorite goddess so I look forward to seeing how she figures into the mystery.
Posted by Toni at 1:57 PM